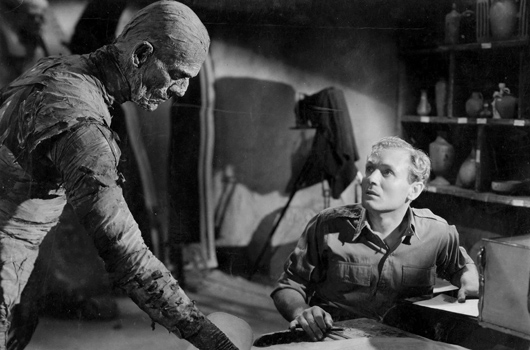 The resounding success of both Dracula (1931) and Frankenstein (1931) was a natural catalyst to encourage Junior Laemmle to invoke another prime time monster. His shiny new horror duo had both moved on to successful follow-ups in the genre, Lugosi Murders in the Rue Morgue (1932) and Karloff The Old Dark House (1932), but their roles had been wayward misfits rather than staples of horror lore. Turning to the much-publicised curse of the boy king Tutankhamen, young Carl commissioned a treatment from Nina Wilcox Putnam and Richard Schayer which would eventually end up as The Mummy.

Beginning life as Cagliostro, a story of pseudo-scientific Egyptian alchemy, the story which progressed through The King of the Dead to Im-Ho-Tep under the pen of John L Balderston was not given its immortal title of The Mummy until half-way through shooting. 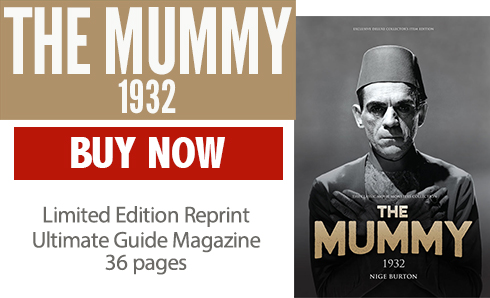 Already their A-lister monster, Karloff was billed by surname only as ‘Karloff the Uncanny’ and took on the ‘dual’ role of the bandaged, mummified priest Imhotep and his more urbane incarnation Ardath Bey. In this most gruelling of all the Jack Pierce make-ups he would wear, the star spent eight hours being wrapped in claustrophobic bandages before being caked in fuller’s earth. 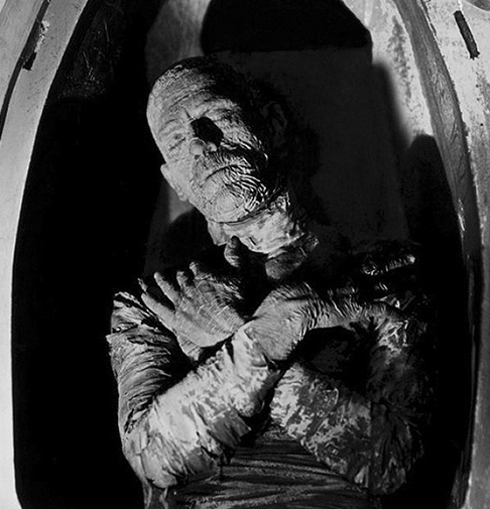 Due in no small measure to the visionary brilliance of director Karl Freund, The Mummy remains a masterpiece of cinema even today. A competent cast including Edward Van Sloan, Bramwell Fletcher, Zita Johann and David Manners help to infuse this inspired story of Egyptian mysticism with as much life as the titular character itself.

The action begins in 1921, just north of the Valley of the Kings, where Egyptologist Sir Joseph Whemple (Arthur Byron) has made the discovery of a lifetime; the tomb of the high priest of the Temple of the Sun at Karnak, Imhotep (Karloff). Buried with the mummy is an ancient box bearing the awful prophetic warning, “Death – eternal punishment for anyone who opens this casket. In the name of Amon-Ra, the King of the Gods”. 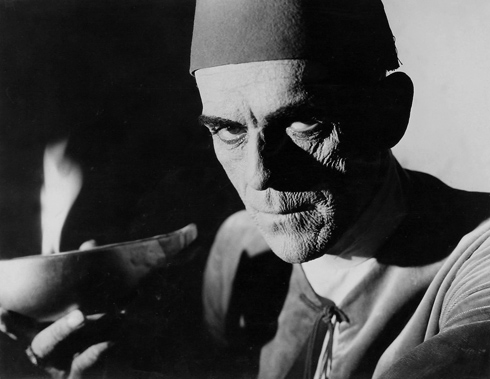 As Imhotep’s alter-ego, Ardath Bey, Karloff gives what is undoubtedly one of his finest performances, in The Mummy (Universal 1932)

The curse’s mettle is soon tested; as Whemple discusses the stern moral issues with Dr Muller (Van Sloan), assistant Ralph Norton (Fletcher), left alone with the booty, can’t resist a good old plunder. He opens the casket and finds the Scroll of Thoth, the life-giving parchment by which Isis raised Osiris from the dead. As he mutters the incantation, the crumbling corpse of Imhotep flickers into life and silently crosses the tomb to retrieve the sacred scroll, leaving Norton a half-crazed laughing madman.

Fast-forward eleven years to ‘present day’, where Whemple’s son and heir Frank (Manners) is on the verge of packing up his expedition when he receives a visitation from wizened Egyptian Ardath Bey (Karloff), who leads him to the buried tomb of Princess Anck-es-en-Amon. Meanwhile, in Cairo, lofty socialite Helen Grosvenor (Johann) feels a frisson of something mystical whilst at a party with Muller. 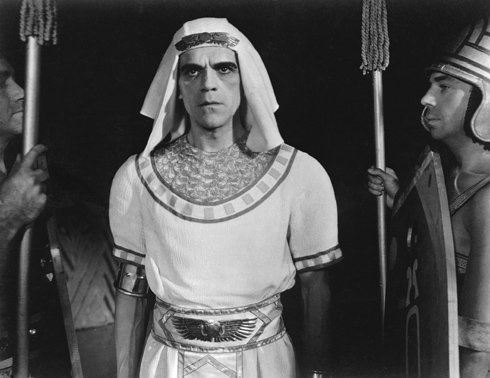 The high priest Imhotep (Karloff) defies the gods in style, in The Mummy (Universal 1932)

Allowed unrestricted access to the museum-housed remains of the princess, as a thank-you for his assistance in their discovery, Bey – who is really Imhotep unwrapped – sets about reviving his long-dead love, when he realises she has reincarnated as the divine Ms Grosvenor. Undertaking to win her back, he locates her and with the aid of his Nubian assistant (Noble Johnson) endeavours to remove any obstacle in his path, including Sir Joseph, whom he dispatches with all alacrity. 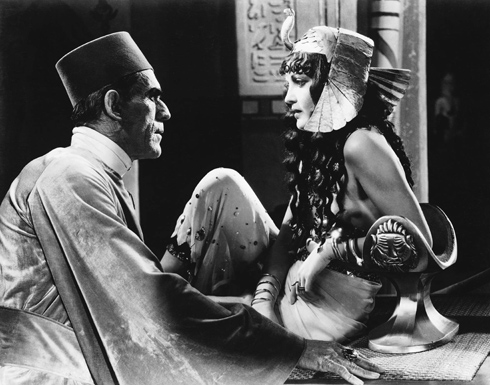 With Helen in his thrall, he repairs to the museum where he shows her glimpses of their past lives. Preparing her for the ultimate sacrifice so she can become an eternal mummy like himself, he is interrupted (a la Dracula) by Frank and Dr Muller, whose timely arrival bring the lass to her senses just in time for her to invoke the power of Isis. In a single supernatural manoeuvre by the statue of the goddess, the Scroll of Thoth is destroyed and Bey reduced to a pile of bones. 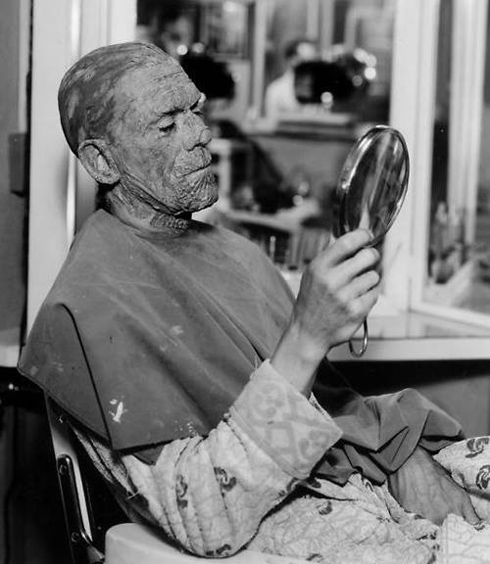 Brought in by the diligently efficient Freund under budget (just $196,161) and under schedule, The Mummy was an unprecedented success, which makes it a surprising fact that no sequels or follow-ups were engendered until 1940’s The Mummy’s Hand, which was almost a remake. A tough vehicle for both cast and crew, The Mummy was made over a gruelling seven-week schedule, which occasionally resulted in near-24-hour days, especially for Karloff. 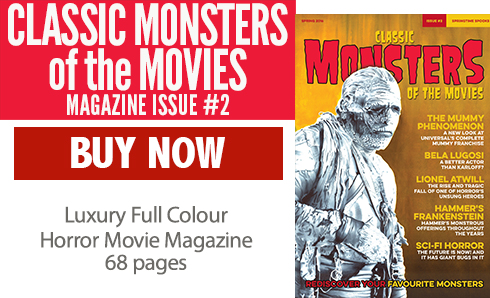 But what remains is a beautiful, lavish, stylised film which delivers almost as much of a punch to audiences in the 21st Century as it did to astounded cinemagoers in 1932. That time has been so kind to it is proof indeed of its solid performances and ingenious technical foresight. The Mummy is a classic horror film which seems to have suffered little from the vagaries of both time and ever-changing cinematic trends. In short, it is one of the real gems of monster movie history. 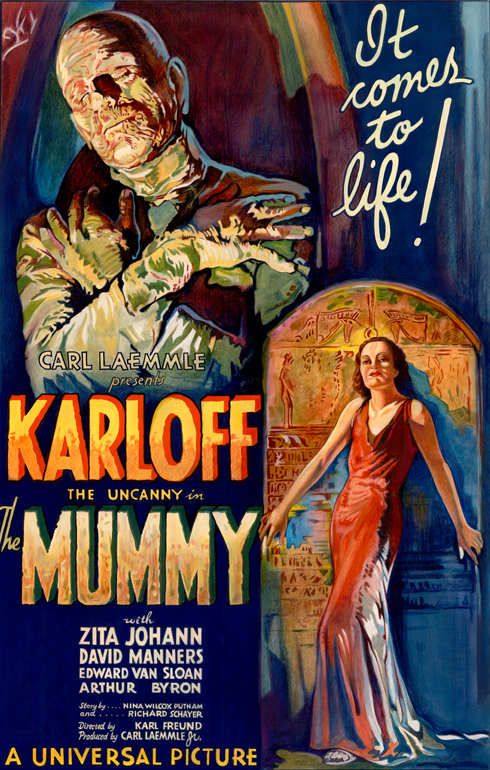 “he went for a little walk”

Hi CM. Over the past few months I’ve purchased 6 of your great publications & looking forward to receiving the 2nd edition of “Classic Monsters of the movies”. My question is, are you planning on producing a folder or some sort of binder for the magazines to be saved in?

Hi Mark – we will indeed be making binders available later in the year. Thanks for all your support!