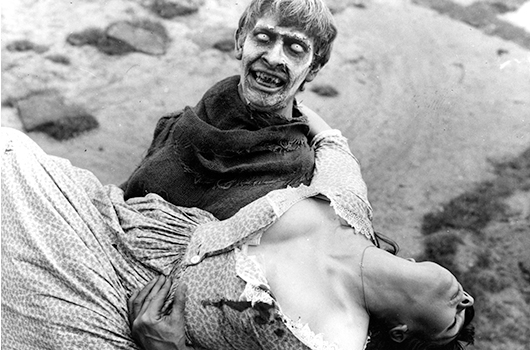 By the mid 1960s, Hammer had reinvented pretty much all of the original Universal monsters; although the age of the sequel was still in its infancy, it was nonetheless time for something new.

Once more looking back to the classics of the golden age for inspiration, they alighted upon White Zombie (1932), which had starred Bela Lugosi as zombie master Murder Legendre. Peter Bryan, a one time camera operator on the studio’s early horrors, had originally created a story outline entitled The Zombie in 1962; he had also collaborated with Jimmy Sangster on 1960’s The Brides of Dracula. By November of 1962, producer Anthony Hinds saw the potential in Bryan’s idea, and began developing it into a fully fledged treatment, but Universal executives firmly declined it. 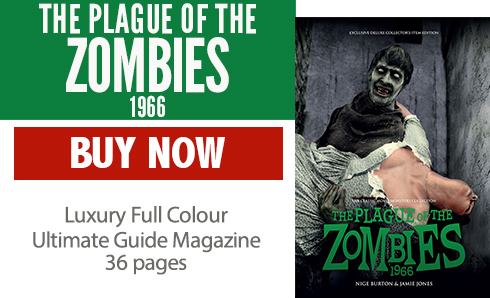 Change was in the air anyway, and it would be Twentieth Century Fox who would provide financial input for Hammer in return for world theatrical distribution rights (excluding, of course, Britain and the Commonwealth). Executive producer Anthony Nelson Keys was putting together a four-film deal for the new partners; with theatre audiences dwindling, as television and the more permissive atmosphere of ‘dancing venues’ competed for an increasingly fickle general public’s entertainment attention span, economies must be made, and the four film back-to-back package made financial sense.

The pictures in the quartet comprised two A-features, Dracula Prince of Darkness and Rasputin the Mad Monk, and two B-supports, The Plague of the Zombies and The Reptile. As the two main movies were to interchange sets and actors, so were the secondary attractions, and so it was decided to release them box and cox, Prince of Darkness with The Plague of the Zombies, and Rasputin with The Reptile. Nelson Keys’ director of choice was John Gilling, who had proved himself on 1961’s The Shadow of the Cat. The result was a surprise to both Hammer and the fans; The Plague of the Zombies – despite its B-picture status – has stood the test of time as well as any of the studio’s productions, becoming a sleeper hit which is now considered as being among their best work. 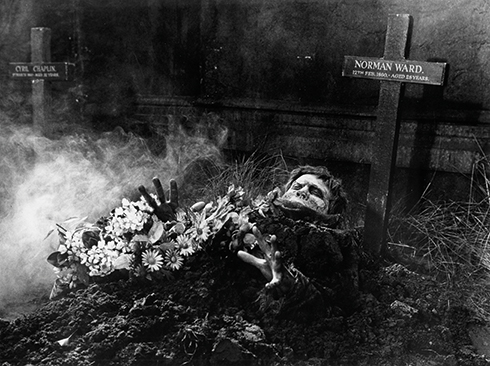 One of the zombies (Peter Diamond), who rise from their graves in Dr Tompson’s nightmare in The Plague of the Zombies (Hammer 1966)

Rather than the ‘cheap support’ it was intended to be, what emerged with The Plague of the Zombies was a well-crafted standalone jewel in the crown of Hammer Horror. Arguably one of the last traditional zombie movies before the onset of brain-eating, marauding thugs, the film actually benefits in its transplantation from the original Haitian setting to a remote Cornish village, engendering fear in the very familiarity of its surroundings.

The Plague of the Zombies is awash with moments of shock and genuine horror. There is, of course, the famous dream sequence in which Dr Peter Tompson (Brook Williams) ‘witnesses’ the village’s dead rising from their graves, shaking off the earth which has hitherto held them at rest, a sequence chillingly orchestrated by Gilling. No sluggard either is the infamous beheading scene, which made it into final cuts exactly as intended thanks to Hinds’ knowingly deft handling of the censors. 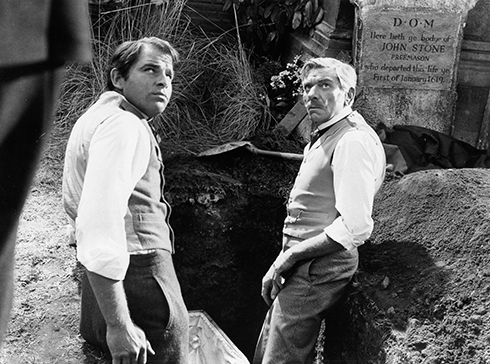 The cast are a delight to behold, from seasoned old pro André Morell as Sir James Forbes to the collected John Carson, who brings the amoral Squire Hamilton to life. In support we have Brook Williams as the good Dr Tompson, in a pleasing enough rendition of this fairly central character, and Jacqueline Pearce making up for her lack of screen time with her presence and ability. As Professor Forbes’ daughter Sylvia, Diane Clare brings a spirit to the role which was not the norm in mid-sixties period pieces like Plague. Stalwart support comes once more from the evergreen Michael Ripper, Alexander Davion as Denver, and Louis Mahoney as Hamilton’s faithful servant.

With the whole production laced with James Bernard’s explosive score, The Plague of the Zombies is a very fine film indeed, if something of an anomaly in the Hammer stable. As their only zombie offering proper, it stands alone in a sub-genre which had yet to re-find its feet. This uniqueness, combined with Gilling’s direction and Hammer’s knack of creating low-budget masterpieces, makes it a motion picture worthy of high praise from a much wider audience than the devout horror fans. 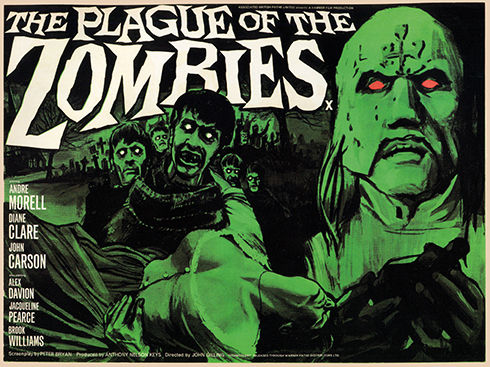 And to me, there is no scarier moment in any Hammer film nor almost any horror film of the time than that shocking appearance of the Zombie dumping poor Jacqueline Pearce down the hill to Diane Clare. Holy crap that is a shocker.