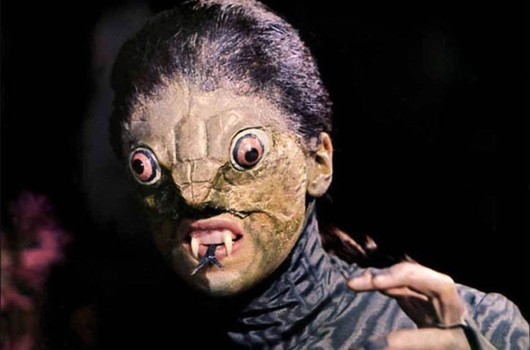 In John Gilling’s atmospheric 1966 thriller The Reptile, a small village in Cornwall is suffering from an outbreak of mysterious deaths that are simply referred to as The Black Death.

Victims of this plague are found with their features blackened and a type of froth coming from their mouths. Since there is no local physician in attendance, victims are often simply buried the next day, and nothing more is said. In the film’s opening moments, we are witness to a mysterious attack on one of the villagers, but since we are not told whom the participants are, this beginning feels more like the end of the film. 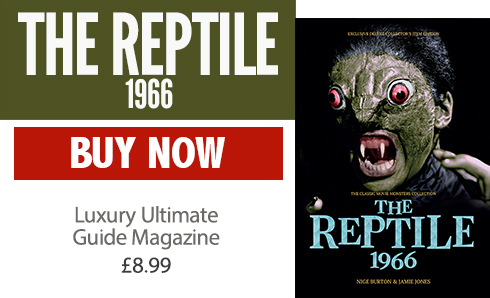 The next scene is in a lawyer’s office for a reading of the will whereas Harry Spaulding is told that he has inherited his recently deceased brother’s cottage. When his brother Charles (David Baron) dies suddenly, Harry Spaulding (Ray Barrett) and his new wife Valerie (Jennifer Daniel) inherit the cottage; even though the locals give them the cold shoulder, Harry makes friends with the hospitable barkeeper, Tom Bailey (Michael Ripper).

Upon arriving at the cottage they find that it has been extensively vandalised; undaunted, they reaffirm their intentions of residing in the village, no matter what. Harry goes into the local pub and encounters silence from the other residents; he loudly announces that his house has been ransacked and he demands to know which of the villagers did it. Of course no one owns up to the deed, but nevertheless they all act somewhat guilty, as if they knew who did it, but they weren’t willing to disclose who was responsible. 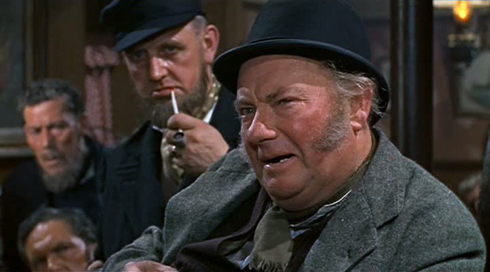 Resident nutcase, Mad Peter (John Laurie), seems to be the only one that is willing to talk, but his babbling appears to be the raving of a madman; is he to be taken seriously? Resolutely the couple invites the local eccentric into their home for a dinner and after a meal, Harry begins peppering Mad Peter with questions regarding the mysterious deaths. As Mad Peter begins to speak, we can hear in the distance a peculiar sound, like an Egyptian flute of sorts. Peter is distracted by the noise and starts raving about the sound of death; suddenly he picks up and runs out the door of the cottage while clutching his head.

Later that night, Harry is awakened by an odd sound from downstairs: a distorted face is seen at the window, a distinct froth coming from the victim’s mouth. It is Mad Peter and he is quickly dying while under the influence of a strange ailment; obviously the phantom menace that is affecting the village has struck again. Harry removes the stiffened corpse to a shed outside and we are given a glimpse of a menacing figure lurking in the dark. As is customary, the next day the body is given a quick burial with the only ones in attendance being the Spauldings and Tom Bailey. Once again we are given the impression of a sort of an impending sense of doom upon the small village. 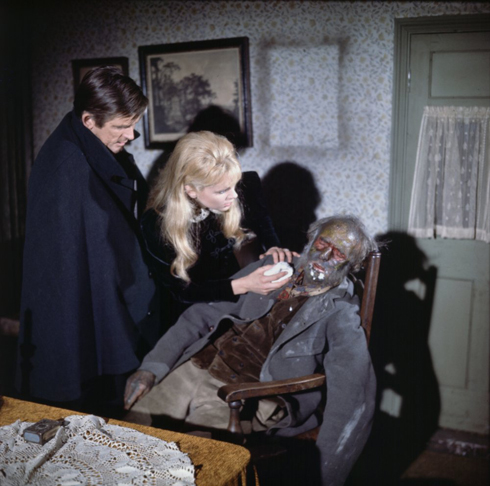 A tense moment from The Reptile (Hammer 1966)

Nearby, a large impressive home sits, and we are told that this is the home of a Dr. Franklyn (Noel Willman), an extremely unfriendly doctor of theology. He resides here alone with his beautiful, but agitated daughter, Anna (Jacqueline Pearce) and a silent manservant. Earlier on we saw the doctor barge his way into the cottage while looking for his daughter; his rude manners and haughty attitude do not cause the audience to feel the least bit of sympathy for him. The next day Valerie returns to the cottage only to find it occupied by a stranger; it is Anna and she is decorating the place with freshly picked flowers as a sort of peace offering to the new residents.

Anna’s personality is seemingly high strung, and after she sees the manservant outside the cottage, she is forced to suddenly leave. Upon opening the front door, the ladies come face to face with the cranky Dr. Franklyn, who in his own taciturn way, offers the couple an invitation to dinner at the big house. Later that night they are guests of the Doctor, but to their chagrin, Anna is not invited to attend. “She is being punished,” states the Doctor, and that is all that is said.

After dinner, Anna is invited to attend the gathering in the parlour, and it is there that the doctor once again stresses to Harry that they should leave the area immediately. The doctor explains that he is not a medical doctor, but one of theology and that his expertise is in ancient cultures and their religions. We also learn that Anna has accompanied the doctor on all of his journeys around the world and that she is quite the accomplished musician. Sporting a colourful sari, Anna picks up a sitar and proceeds to play a haunting melody, all the while making intense eye contact with her father, who seems to be undergoing some sort of malevolent fit of temper. Indeed, the doctor is outraged, and he smashes the instrument into pieces while his guests look on in horror. With this vicious display, the couple are summarily dispatched from the house and return back to their own cottage. The doctor is quite the strange bird it seems, and his behaviour is unexplained.

It is later when Harry seeks out Tom for some friendly counsel in the strange matters at hand; Tom quickly makes it known that he intends to stay in the town, run his pub, and die in his bed at home, in that order. The next day Tom visits the cottage and apologises to Harry; he has had a change of heart and is willing to assist Tom in getting to the bottom of the mysterious deaths. Tom is more than a man of his word as he takes Harry into the back rooms of the pub and shows him the exhumed body of one of the victims. “I wanted to take a look at him,” he explains, and it is clear that the victim has suffered from some type of two-pronged bite on the neck.

Their plan is next to dig up Harry’s brother and examine his corpse for the bite mark; of course the neck shows the telltale signs of such an attack as well. The men compare histories and both agree that they have seen this type of thing previously; this is the type of mark an asp makes when it attacks. That explains the manner of death, but doesn’t explain what an exotic creature would be doing in the cold climate of Cornwall. The mystery must reside in the halls of the doctor’s palatial estate.

Harry takes it upon himself to do some snooping by himself at the doctor’s house, and after gaining access through an unlocked window, he is left to roam about the shadowy corridors. Suddenly, while being confronted by the doctor, we see Harry being attacked by a shadowy figure from behind. Large fangs are thrust into his neck, but luckily a rather stiff collar prohibits the fangs from fully entering. This scene is an almost exact reproduction of how his brother Charles lost his life at the beginning of the film.

Staggering home, he asks his wife to get a knife and make a deep incision in his neck; we can see the gangrenous wound and its discolouration about the neck, surely death must be close at hand? Ah, but there’s nothing a good night’s rest won’t cure, and within days Harry is making a full recovery from the near lethal attack. But Valerie is curious too. What was it that attacked her husband? What was it that Anna was trying to warn them about?

In a nice reversal of traditional roles, Valerie takes the lead and with her husband asleep in bed, she too sneaks into the house in search of answers. Upon finding the doctor temporarily asleep in his study, Valerie makes her way downstairs to an underground cavern beneath the house. There in front of a bubbling sulphur pit lays the person once known as Anna, but she is now transformed into a hideous snake like creature. Later on, when all of the doctor’s secrets are revealed, we learn that Anna was kidnapped by a tribe in Borneo and transformed into a serpent girl; it is she that has been killing the townspeople with the Black Death, it is she that is lying in a state of hibernation next to the bubbling sulphur pit, it is his daughter that is responsible for this ongoing hellish situation.

In typical fashion, the doctor accidentally sets the house afire while trying to dispose of his manservant, who actually is the one calling the shots, dumping him into the heated pool. Meanwhile Harry and Tom realise that Valerie is at the manor across the moors and set off to save her. The doctor has Valerie trapped in his study, and is about to make a hasty retreat when his daughter attacks and kills him. Next, Anna enters the study and is about to strike on Valerie when suddenly Tom is outside the house, breaking the windows and allowing the cold air to enter the room. Anna perishes due to the cold weather and all escape the house as the credits roll.

This film was a Hammer production and was made on the same sets as The Plague of the Zombies (1966). The Reptile also was made by the same director, John Gilling, and shared some of the cast with the parallel film as well. Some critics have argued that Plague of the Zombies is a better film, but The Reptile was originally scheduled to be the other half of a double feature with Rasputin, The Mad Monk. Fans of Hammer will find much to be delighted with here though, and the performances are all excellent. 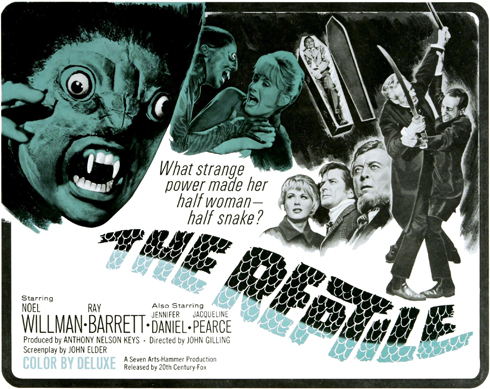 Typical Hammer horror without stars but dripping with a see-through plot. A fun 89 minutes!