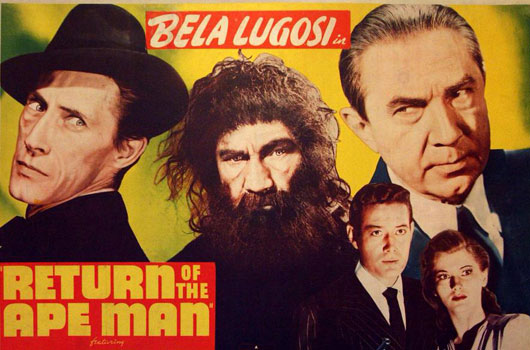 Starring Bela Lugosi and John Carradine, the film also featured Frank Moran as the titular simian, who is brought back to civilisation from an Arctic expedition (most of which is actually stock footage from a 1926 Pathé two-reeler). Lugosi and Carradine are both keen to exploit their new charge, but he lacks the brain capacity to be of much use – until a straightforward solution quickly presents itself in the shape of transplant surgery.

At this point, Return of the Ape Man displays “inspiration” from Frankenstein meets the Wolf Man (1943) with some brain-transplant antics; the horrified Carradine unwillingly donates himself to medicine as the monster’s modern medulla, and retains the urge to head home for the evening, unaware of what his wife might think.

Despite the apparent connection with 1943’s The Ape Man, and the presence of Bela Lugosi in both films, Return of the Ape Man is a totally independent production and most definitely not a sequel. It was the final movie Lugosi made for Monogram. Interestingly, publicity materials give George Zucco third billing, even though he only appears in the film for a few moments; his contract required that he be listed as such, but he fell ill before before filming began in earnest, and was replaced by Moran.