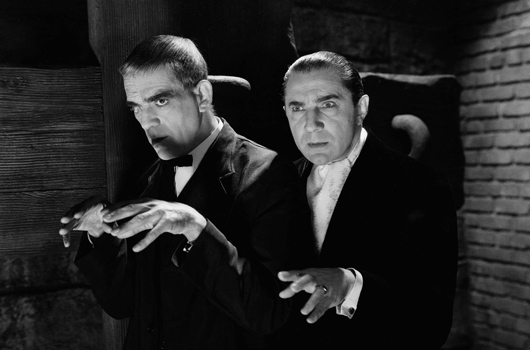 Universal’s classic Edgar Allan Poe-inspired horror film, The Raven, was released on the 22nd of July, 1935.

Although Bela Lugosi carried the lead role effortlessly, it was Boris Karloff who got top-billing, made more apparent to his co-star by the Garbo-esque dropping of his Christian name. 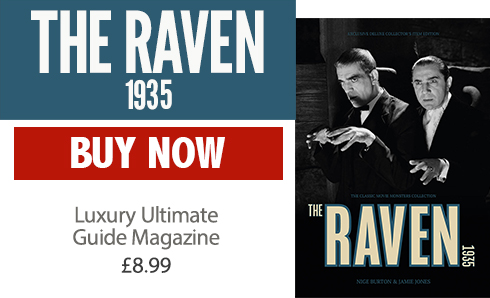 Directed by Lew Landers under his real name of Louis Friedlander, The Raven tells of Poe-obsessed surgeon Richard Vollin (Lugosi) who, after saving the life of pretty Jean Thatcher (Irene Ware) following a car crash, is warned off his romantic inclinations toward the gal by overzealous father Judge Thatcher (Samuel S Hinds). Furious, Vollin enlists the reluctant help of escaped convict Edmond Bateman (Karloff) in the promise that he’ll change his appearance to both improve his looks and help him escape the law.

Double-crossed by Lugosi, Karloff emerges from surgery a disfigured monster, prompting him to rescue the captives. Lugosi shoots Karloff, but the dying hero kicks him into his own shrinking room shere slowly, agonisingly, the walls close in on him. “Poe – you are avenged!” screams Lugosi as his stuffed raven falls symbolically to the floor.

A striking film even today, The Raven’s gruesome plot deals with the taboo subjects of disfigurement and torture, Lugosi’s house on Hillview Heights being a veritable Poe torture chamber in its own right. The shocking moment where he reveals the results of his operation on Karloff’s seventh cranial nerve in six long mirrors is an iconic piece of cinema. As the snarling Karloff smashes the mirrors one by one, a gleeful Lugosi ejaculates: “Your monstrous ugliness creates monstrous hate! I can use your hate.”

“Maybe if a man looks ugly he does ugly things,” intones Karloff in a sequence as exciting today as it was in the 30s.

It was all too much for the British censor; horror films were banned in England for a while thanks to The Raven. The Laemmles were out, and the new brooms at Universal were sweeping the horror clean away for now, a disastrous blow for the troubled Lugosi. It would not be until Son of Frankenstein in 1939 that he would begin his brief but glorious recovery.