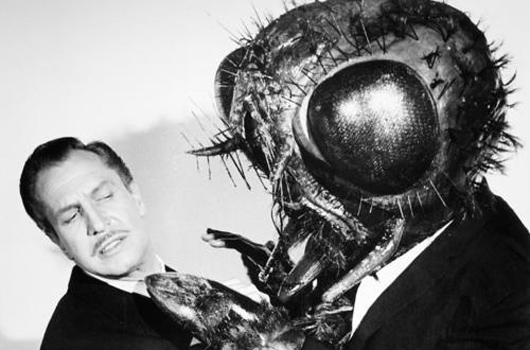 Vincent Price returns as Francois Delambre, but with even less to do than in the first film, spending most of the second half in a hospital bed.

Originally desperate to have nothing to do with his nephew Phillipe’s determination to repeat his father’s transporter experiments, he is ultimately persuaded by that protege’s lack of funds. Naturally, it all goes wrong and, after a rather disturbing scene with a hybrid hamster man and his miniature antithesis ending up all juxtaposed with one another, the young Phillipe comes over all compound eyes and claw, this time as a result of a malicious David Frankham.

Surprisingly, the day is saved, the fusion reversed, and all ends happily, leaving the way clear for the third and final instalment, Curse of the Fly in 1965, from which Price was conspicuous by his absence.

After the ’TERROR-COLOR by DE LUXE’ spectacle of the original, perhaps Return of the Fly’s downgrading to black and white gave a clue about Fox’s attitude to the production before it even got off the ground. Price reportedly lamented his involvement, but claimed the script was heavily adapted from the one he accepted, and had managed to exclude most of what attracted him to the project.

Directed by Edward Bernds, Return of the Fly is probably more bearable today than it was on its first release, and one can appreciate it for its period charm whilst marvelling at the rather obvious inspirational template it was for 1989’s The Fly II.