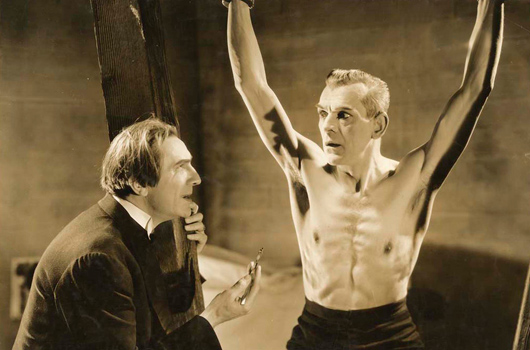 When Universal teamed Karloff and Lugosi in all but billing for their Edgar Allan Poe inspired The Black Cat, released on the 7th of May, 1934, little did they know it would become their biggest box office hit of the year.

Directed by Edgar G Ulmer, the film has achieved both fan and critical acclaim as being one of the classic horrors of the golden age, and is also one of the first to have a complete musical score running through it, written by Heinz Roemheld.

Allegedly suggested by Edgar Allan Poe’s short story, and even crediting him, The Black Cat in reality has virtually nothing to do with it, and Ulmer later admitted that both the title and Poe’s name were used simply to garner a larger audience. Ironically, the film was released as The House of Doom in the UK, where black cats are considered good rather than ill omens. 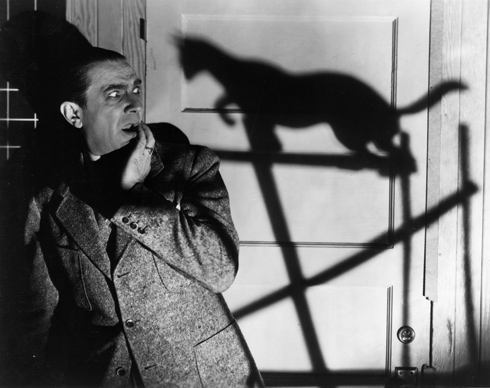 Fearsome feline: Bela Lugosi is suitably spooked by the appearance of the titular moggy in The Black Cat (Universal 1934)

The Black Cat was the first pairing of Karloff and Lugosi, the two biggest horror stars of the time. Despite rumours to the contrary, the two had a great respect for one another, and although they were never bosom buddies, their professional relationship was completely amicable.

The film’s strong notes of sadism and satanism rankled with censors in many countries, and those who didn’t impose an outright ban ordered a substantial toning-down of the more contentious sequences. Something of a loose cannon, the talented Ulmer actually did the opposite, adding extra depravity with the inclusion of the famous scene in which Karloff surveys the preserved bodies of his dead wives before he reveals the fate of Werdegast’s (Lugosi) daughter Karen to him. Surprisingly, this director’s cut of The Black Cat is the one that was released. 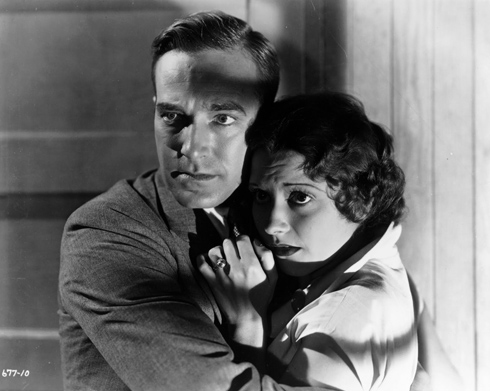 Karloff plays Hjalmar Poelzig impeccably, carefully underpinning the barbarous architect with an air of normality which strengthens his demonic aura, while Lugosi’s Vitus Werdegast is the perfect antidote, vengeful but not at the expense of the innocents.

Co-stars David Manners and Julie Bishop further complement the leads, investing newly-weds Peter and Joan Alison with just enough vulnerability to allow the humour in The Black Cat to work, creating a whole of tension and unease, with us never really knowing if they are exactly prisoners in Karloff’s vast fortress-like home, built on the site of a bloody wartime battlefield, until brutish servant Thamal (Harry Cording) physically prevents their leaving. 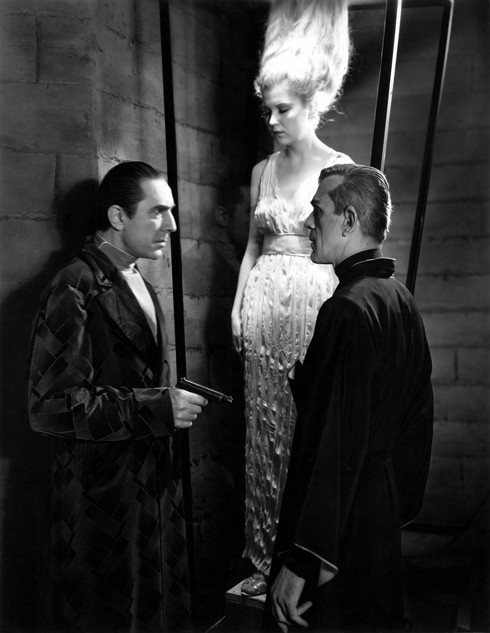 Forced to play chess with Karloff for the life of Mrs Alison, Lugosi ultimately loses, but is determined to help the couple escape until silly Peter makes a hash of everything, fatally shooting their deliverer having mistook his motives as harmful. Never-the-less, escape they do, as a dying Werdegast blows up the mansion along with Poelzig, whom he has recently flayed alive. “It has been a good game!” he intones as the dynamite does its stuff. 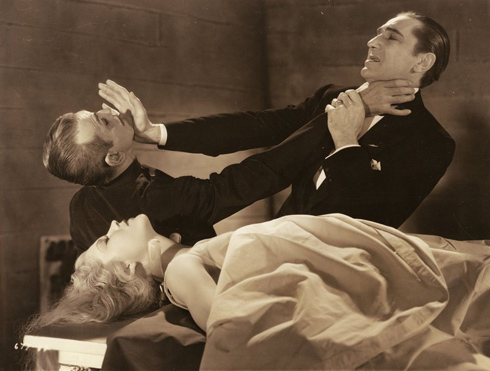 Spooky spat: Devastated at the sacrifice of his daughter Karen (Lucille Lund), Werdegast (Lugosi) determines to get even with Poelzig (Karloff) in The Black Cat (Universal 1934)

In addition to his directorial duties, Austro-Hungarian Ulmer designed the costumes for The Black Cat, as well as collaborating with art director Charles D Hall on the impressive sets. A competent allrounder, the director was a huge loss to Hollywood, when the major players all shunned him as a result of his affair with Shirley Castle, who would later become his wife; Castle was formerly married to Max Alexander, a Universal producer, but more importantly nephew of Carl Laemmle, who frowned heavily upon ‘outsiders’ upsetting his family. When Castle left Alexander for Ulmer, the subsequent scandal got the director blacklisted for the rest of his career, lamentably leading him to see out his days with poverty row specialists PRC.

Ahead of its time, The Black Cat is a tour-de-force, and probably as stylish a piece of cinema as you’re likely to see. It is also Karloff and Lugosi at their best, coupled with its slick production values and bold direction, which in concert make it a disturbing and dark classic; that it pays scant heed to anything even remotely penned by Poe seems to matter little to its legions of admirers. 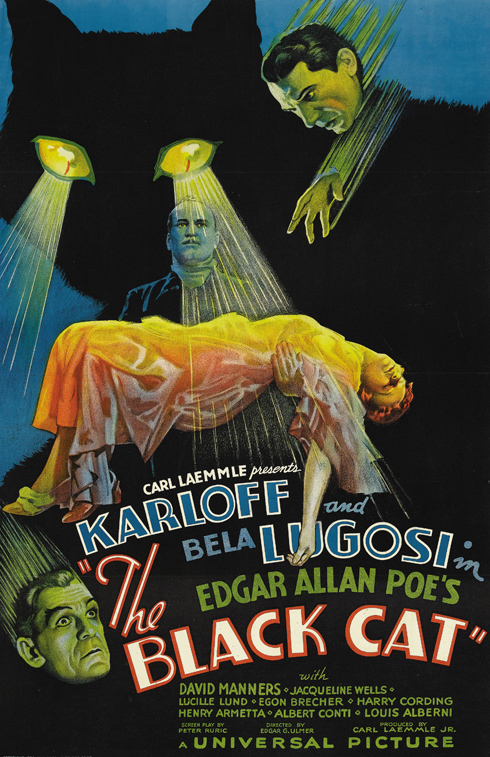 The ultimate horror noir film from the thirties, fortunately produced before the ban. Easily Karloff and Lugosi’s most successful collaboration….not to take anything away from their chemistry in SOF. Frankly I consider The Black Cat to be Lugosi’s finest performance. He has never been more truly distinguished and plays his only true “good guy” role. I have read, however unfortunately, that scenes of Werdegast pursuing Joan Alison were cut…..as were many other “taboo” scenes. The scene of Karen Werdegast lying in Werdegast’s bed with her hair splayed on the pillow looking like a goddess is just so beautiful. And Joan Alison’s scene under the influence of a narcotic as she hypnotically addresses Werdegast and Poelzig in the study is brilliant. But the best line in the film has to be when the Alisons are attempting to escape the ancient Fort Marmaros and Peter tries to call for a cab and the phone doesn’t work. Hjalmar says to Vitus, “The phone is dead. See that Virus, even the phone is dead.” As if this great noir film is not great enough by itself, the use of classical music by Liszt, Brahms, Schubert and Beethoven help to make this gem a work of absolute genius.