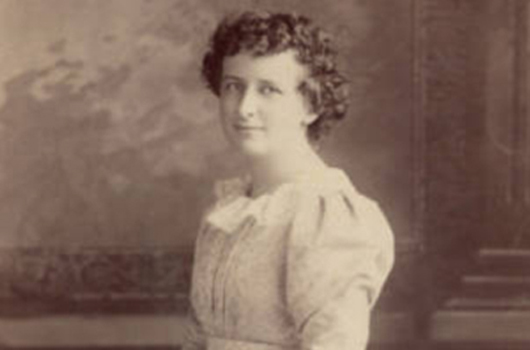 English playwright, novelist and poet Peggy Webling was born in St Martin’s Lane, Westminster, on the 1st of January, 1871.

Although much of Peggy Webling’s work has been forgotten, her one enduring project is her stage adaptation of Mary Shelley’s Frankenstein, the first work in which the creator and created’s names are ambiguously interchangeable.

Margaret Webling and her sisters Josephine, Rosalind and Lucy, grew up with a love of theatre, all four of those precocious young ladies going on to appear on the London stage. Peggy found herself in the society of actress Ellen Terry, and the writers John Ruskin and Lewis Carroll. Encouraged, she spent time in Canada and the US learning more of her craft.

She was requested to write her stage play for Frankenstein by actor/producer Hamilton Deane, who had been having a successful run with his own adaptation of Bram Stoker’s Dracula. The stage play of Frankenstein premiered in Preston, Lancashire, just after Christmas 1927, playing with Dracula as the first double-bill paring of the two titles. After successfully touring the provinces for two years, Frankenstein transferred to London in February 1930, where it ran for 72 performances. The London Times was less than kind, camply remonstrating “Miss Webling, translating into terms of the theatre Mary Shelley’s one lasting and original composition, has unquestionably succeeded in bringing the monster to life; but the play in which she exhibits this wild beast is as flimsy as a bird cage.”

It didn’t put Universal off: in April 1931 they bought the John L Balderston adapted rights to Webling’s play for James Whale to direct his iconic film with Boris Karloff, yet even Balderston himself remarked that Webling’s version was “illiterate” and “inconceivably crude”. The astute Miss Webling had the last laugh; the studio paid her a $20,000 advance plus one percent of the gross earnings on all showings of any films based on the dramatic work.

Peggy Webling died on the 27th of June, 1949 at Peckham House in London.