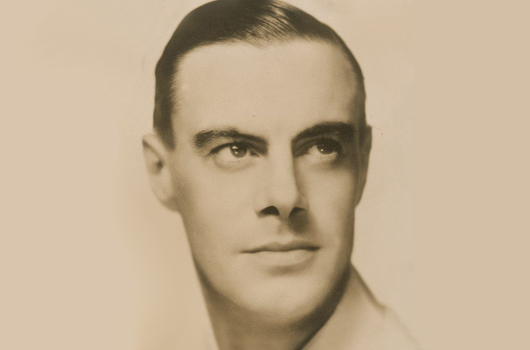 Although most famously remembered for playing Dr Frankenstein in James Whale’s Frankenstein (1931) and Bride of Frankenstein (1935), it was his stage and film portrayal of the tormented alcoholic Captain Stanhope, a role which tragically mirrored his own life, in Journey’s End (1930) which kickstarted his career.

Both stage and screen versions of the R C Sherriff masterpiece were also directed by Whale.

Born in Saint-Malo, France, on the 20th of January, 1900, Colin Clive attended Stonyhurst College and, subsequently, the Royal Military Academy Sandhurst, where an injured knee disqualified him from military service and played a large part in his becoming a stage actor.

From June 1929 until his death, Clive was married to actress Jeanne de Casalis. She did not make the move to Hollywood with her husband, and speculation was rife that she was secretly a lesbian and Clive a homosexual, making them essentially a lavender couple. However, Whale’s longtime partner, producer David Lewis, emphatically states the the actor was not gay.

Colin Clive’s alcoholism took control of his life and his health, and he died from severe complications of tuberculosis. His cenotaph is at Chapel of the Pines Crematory, his ashes having been scattered at sea in 1978, after spending over 40 years unclaimed in the basement of the funeral home where his body was brought after his death.

I have always loved watching Colin Clive’s movies. For the time period he was as good as you’d would expect.

He was a wonderful actor, enjoy everyone of his films! PLEASE RIP SIR

FI’ve been a fan of Mr. Clive’s since 1969…when no one except Monster fans knew who he was. (s) I do know that Jeanne was already an established Actress when she met Colin…ca. 1926-27. Colin, at that time was still virtually unknown, and even in hits like ROSE MARIE and SHOWBOAT, he was usually half way down the cast list. He was also extremely reserved, ( and possibly suffered from stage fright.) Jeanne noticed a great deal of raw talent in an extremely attractive package, and jumped at the chance to create a “Star”.
She DID create that “Star”….and pushed him so hard that he died 30 years before his time…….

I loved Colin Clive’s performance as Dr Frankenstein. In fact, he is my second favourite Frankenstein after Peter Cushing.

A powerful actor who’s role as the original Dr. Frankenstein is truly memorable. Sad end to a great film start.

Colin Clive expressed amazing talent while struggling within his own shadow.
We should always keep a light on for him and never forget his piercing good looks. I have a small artifact from the Frankenstein set. Hope to share it with you some time.