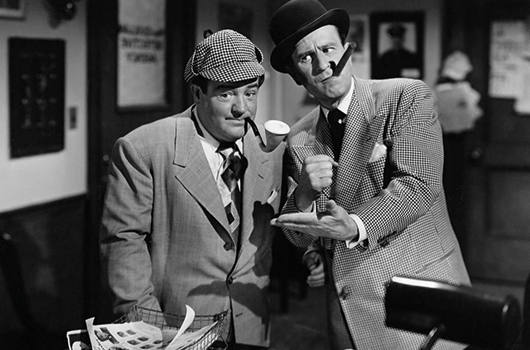 By the early fifties Bud Abbott and Lou Costello had already faced off against the likes of Dracula, the Frankenstein Monster, the Wolf Man and assorted ghosts – with 1951’s Abbott and Costello Meet the Invisible Man, they entered the world of H G Wells.

Fresh from their success with Abbott and Costello Meet the Killer, Boris Karloff in 1949, Hugh Wedlock Jr and Howard Snyder were engaged to blend Bud, Lou and invisibility. Their outline – which they had originally conceived back in 1948 as an Invisible Man film, The Invisible Man Strikes Back, rather than an Abbott and Costello comedy – was handed first to scriptwriters Russell Rouse and Clarence Green, and then to the trio of Robert Lees, Frederic Rinaldo and John Grant. The director’s chair, meanwhile, was occupied by Charles Lamont. What audiences would eventually see was a movie that managed to combine familiar Abbott and Costello merrymaking with altogether grittier themes to create a different kind of comedy experience. 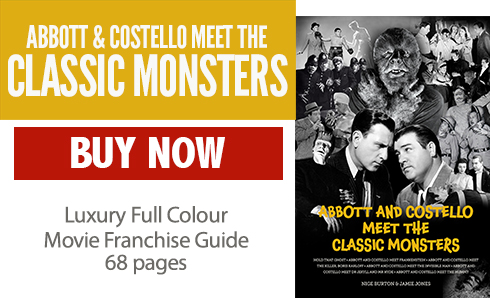 The atmosphere of Abbott and Costello Meet the Invisible Man is often a little darker than the boys’ previous horror crossovers, and a noir atmosphere soon descends with the arrival of escaped convict Tommy Nelson (Arthur Franz), who plans to clear himself of having murdered his manager by use of the invisibility formula willed to Dr Gray by the original story’s John Griffin.

The story strikes the right balance between sufficient complexity to maintain interest and not become a single-thread torrent of jokes, without heading into excessively convoluted plotting. A vital part of the movie’s dynamic is the simmering antagonism between Tommy and the boys: though ultimately working to a similar end, the trio rarely see eye to eye in even a figurative sense. 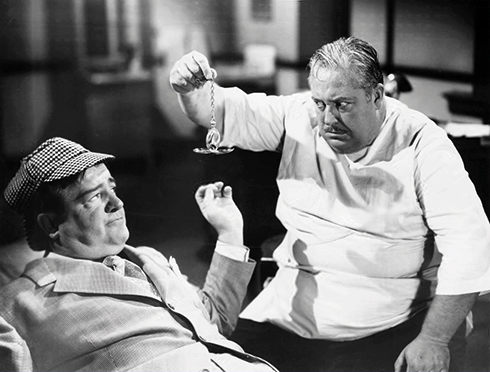 This melting pot of motives and styles makes for a startlingly layered film. Focusing on Bud and Lou’s comedic exploits makes the villains appear as exaggerated criminal underworld stereotypes, while seeing the film as a crime drama almost transforms the two comedians into comic relief characters in what otherwise plays out as a noir thriller with science fiction elements.

Some of the invisibility-based action in Abbott and Costello Meet the Invisible Man does not actually require any special effects, the cast acting as though the invisible Tommy is present but Franz’s lines actually being spoken off-camera. In practice it works superbly, a blistering showcase for Bud and Lou’s slapstick skills. However, this wouldn’t be an Invisible Man movie without some instances of bona fide vanishing and items moving on their own, and in this respect Meet the Invisible Man certainly delivers, with the special effects – including some slick playing-card tricks and an extensive scene of a levitating cigarette – are confidently executed and never anything less than impressive. 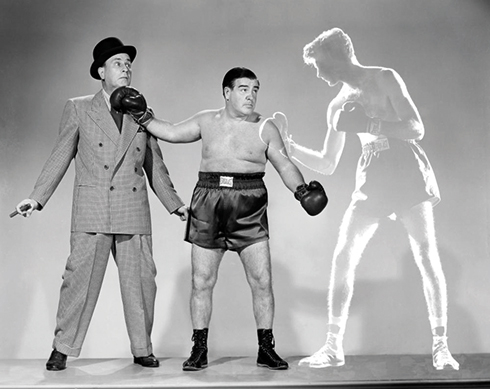 A studio publicity shot of Bud, Lou and Tommy (Arthur Franz) in outline mode in Abbott and Costello Meet the Invisible Man (Universal-International 1951)

In any case, the final hospital sequence makes up for any argued shortfall with its indulgent, explosive outro. Tommy’s reappearance is a well-implemented sequence echoing the tragic finale of the first Invisible Man movie, but – this being an Abbott and Costello film – the idea is quickly switched into comedy mode: the scene of Lou’s back-to-front rematerialisation is a joyously silly moment with which to round off proceedings.

With strong supporting performances from Sheldon Leonard, Nancy Guild, Gavin Muir and Adele Jergens, Abbott and Costello Meet the Invisible Man took two established franchises and melded them confidently together in a successful mix of comedy, noir and science fiction that enjoyed a box office take of over one and a half million dollars. 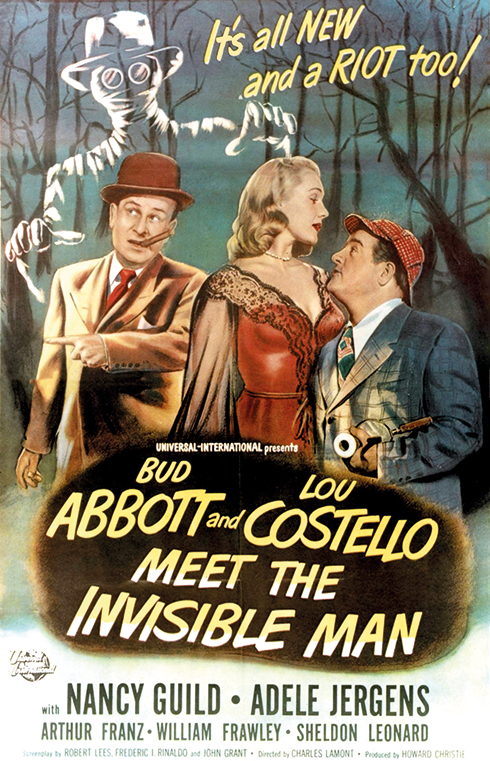