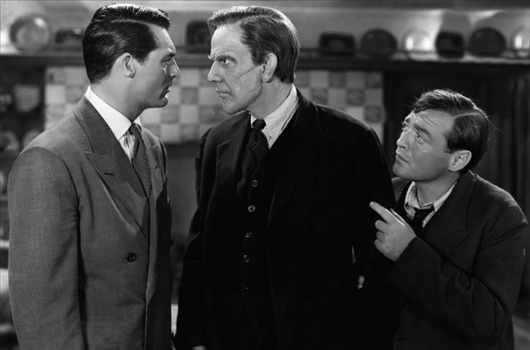 The dark comedy classic Arsenic and Old Lace brought Joseph Kesselring’s acclaimed Broadway play to the big screen. Directed by Frank Capra, the movie was produced by Warner Bros and released on the 22nd of September, 1944, although it had actually been completed some three years earlier due to the availability of its star, Cary Grant.

The original plan had been for Bob Hope to take on the lead role of Mortimer Brewster, but contractual obligations with Paramount prevented his appearing. Both Jack Benny and Ronald Reagan had also had initial approaches from Capra, but once it was understood Grant was prepared to accept the role, he was cast at once. 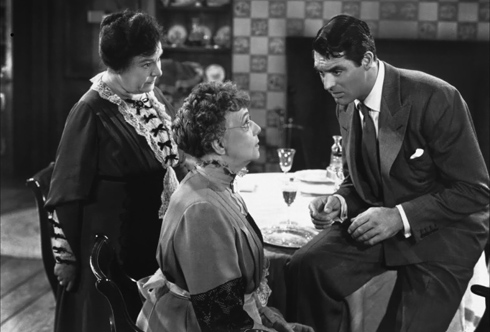 The role of Jonathan Brewster, the character who “looks like Karloff”, had been played by Boris Karloff himself on Broadway. Whilst several actors, including Josephine Hull, Jean Adair and John Alexander, had received a couple of months’ leave of absence from the stage show in order to appear in the film of Arsenic and Old Lace, Karloff was an investor as well as its main attraction, so could not abandon the play. The role of Jonathan iconically went to Raymond Massey.

The plot of Arsenic and Old Lace focuses on the murderous Brewster family, in particular elderly sisters Abby (Hull) and Martha (Adair) in their “charity work” of ending the presumed suffering of old and lonely bachelors by administering elderberry wine laced with arsenic, strychnine and “just a pinch of cyanide”. Their bodies are buried in the basement by “Teddy” Brewster, who believes he is Theodore Roosevelt. Amid multiple misadventures, Mortimer attempts to conduct his life with his new bride Elaine Harper (Priscilla Lane), only to find himself further entangled in the family’s insane schemes.

Arsenic and Old Lace was well received by critics and audiences alike, and was described by the New York Times as “a piece of good macabre fun”, a reputation which it still enjoys today. 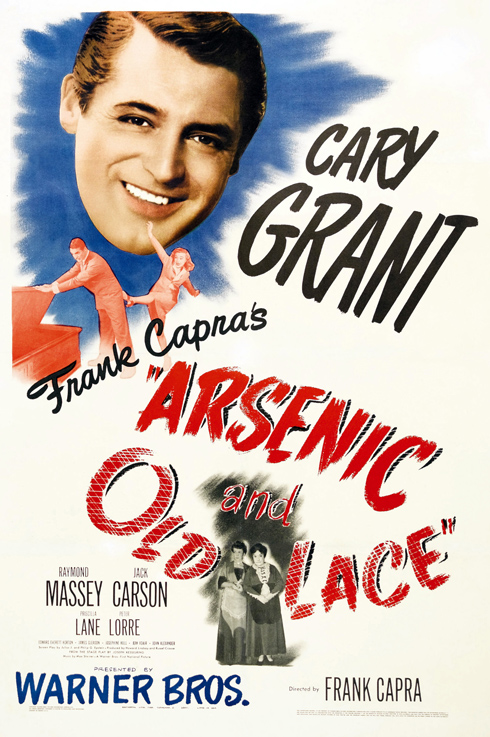 When Jonathan is asked why he killed his latest victim, he snarls, “He said I looked like Boris Karloff.” On Broadway, that line must have brought down the house, since it was Karloff himself playing the part.

Raymond Massey gave a fine performance, but it’s a shame Karloff could not play the part in the movie. The line is funnier when it’s a meta in-joke or self-parody.

Bela Lugosi played Jonathan in a road show production of the play. Don’t know if they left the line as it was originally, or if they changed it to “He said I looked like Bela Lugosi.” Either way, it would have been pretty funny. Studio publicity portrayed Karloff and Lugosi as fierce rivals.

A made-for-TV play in the late 1960s starred Bob Crane as Mortimer and Fred Gwynne as Jonathan. The line was changed to, “He said I looked like Frankenstein’s monster.” It would have been funnier if Fred could have said “Herman Munster,” but maybe they couldn’t use that name because of the trademark.