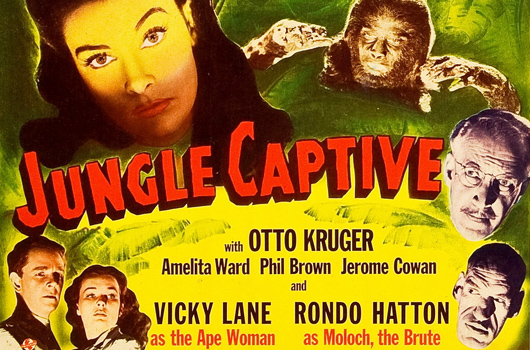 The Jungle Captive, the third instalment in the trilogy of films focusing on Paula the Ape Woman, was released on the 29th of June 1945.

A sequel to Jungle Woman (1944), itself a sequel to Captive Wild Woman (1943), The Jungle Captive lifts footage from both its predecessors as well as employing stock Universal footage – elements which attest to the paucity of resources and imagination allocated to the project.

Cliche-ridden and devoid of any real élan, the film is notable largely for its many shortcomings. Particular lowlights include its glib approach to surgery (scientist Dr Stendahl, played by Otto Kruger, performs a brain transplant based on instructions read from a single index card), and some astonishingly cruel scripting which takes casual shots at the appearance of acromegaly sufferer Rondo Hatton.

The Paula Dupree series has not worn well with the passage of time, and The Jungle Captive is now seen as a rather tragic full-stop at the end of a somewhat unnecessary trio of movies.