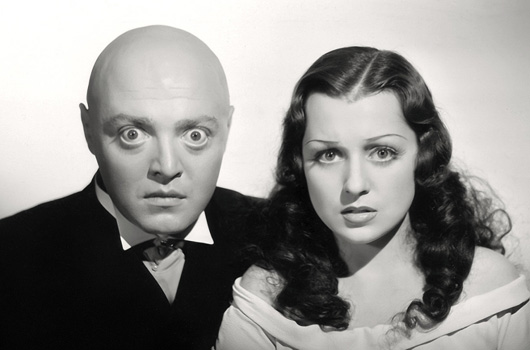 In the golden age of horror, MGM liked to think they ran a close second to Universal, although many of their features were criticised for lacking true supernatural context, such as the vampires being explained away as actors in Tod Browning’s London After Midnight (1927) remake, Mark of the Vampire (1935).

Their other 1935 entry, Mad Love, was no exception, although it still stands up today as one of the most genuinely nightmarish films ever to come out of Hollywood.

Seen in England as The Hands of Orlac, Mad Love was lambasted upon its original release, and berated by critics of the day as being “neither important or particularly compelling” (The Hollywood Reporter) and “completely horrible” (Time). It performed dismally at the box office, grossing just $170,000 domestically and a slightly better $194,000 internationally – disappointing returns on a budget of $403,000. 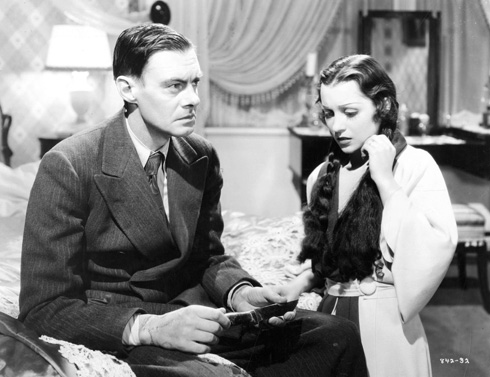 The film was cameraman Karl Freund’s last turn in the director’s chair; he had really wanted to be at the helm of the camera, and antagonism between him, appointed cinematographer Chester Lyons and producer John Considine Jr bubbled on throughout production. Performances generally also came in for harsh words from critics too, although Frances Drake and Colin Clive were more than suitable leads. But however good they were, their efforts were always going to be dwarfed in the shadow of a tour de force fete of acting from a young Hungarian actor making his American film debut: Peter Lorre.

Lorre had made his indelible mark on world cinema with his portrayal of a childish child killer in Fritz Lang’s M (1931) and, finding himself in enforced exile in the early 1930s due to his Jewish descent, arrived in Hollywood via Hitchcock and England with The Man Who Knew Too Much (1934).

His scene stealing performance as the creepy, maniacal and obsessive Dr Gogol in Mad Love is one of the true great acting achievements in horror movies; the horrific apparition who meets Stephen Orlac (Clive) at the Inn of the Three Feathers, throwing back its cloak to reveal hands of articulated steel – “I have no hands. Your hands were mine once.” – and then his cape – “They cut off my head, but Gogol put it back!” – the hideous, bloated face, with its sinister grin peering out from a leather head brace is one of the most macabre, chilling moments in the hundred-and-odd year history of the horror film. Lorre’s performance led Charlie Chaplin to call him “the greatest living actor”. 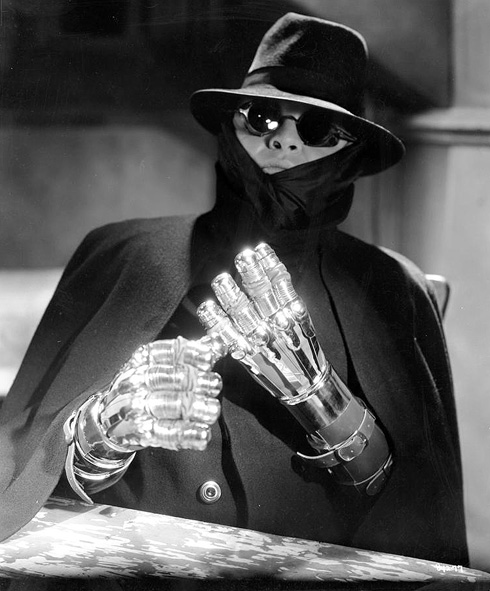 Based on Maurice Renard’s story The Hands of Orlac (Les Mains d’Orlac), Mad Love was a remake of Robert Wiene’s Austrian silent 1924 classic starring Conrad Veidt. With a screenplay by Werewolf of Paris author Guy Endore and additional treatment from John L Balderston, the story takes on a perverted sense of the original; the audience is aware of Gogol’s obsessive depravity from the outset, making for an even more haunting plummet into madness and chaos.

Deeply infatuated with actress Yvonne Orlac (Drake), Gogol cannot accept that she is to give up her nightly show at the Parisian Grand Guignol Théâtre des Horreurs to live in England with her pianist husband Stephen. When Stephen’s hands are crushed in a train crash, she persuades Gogol, despite her better judgement, to operate to save them. Instead, he stitches on those of guillotined knife murderer Rollo (Edward Brophy). As Orlac becomes convinced his new hands have murderous tendencies, Gogol decides to exploit the fact to try and win over Yvonne. The day is saved when American reporter Reagan (Ted Healy) helps to unravel the crazed Gogol as he is about to dispatch Yvonne by strangling her with her own hair; Clive throws a knife, Gogol dies, the couple embrace and all, once again, is well.

With a complex plot, stunning central performance from Lorre and neat, if troubled, direction from Freund, Mad Love remains one of the highlights of cinema even 80 years after its first appearance. Thankfully, modern critics have been much kinder to it, and it finally gets the recognition that it truly deserves as a masterpiece of twentieth century film making. 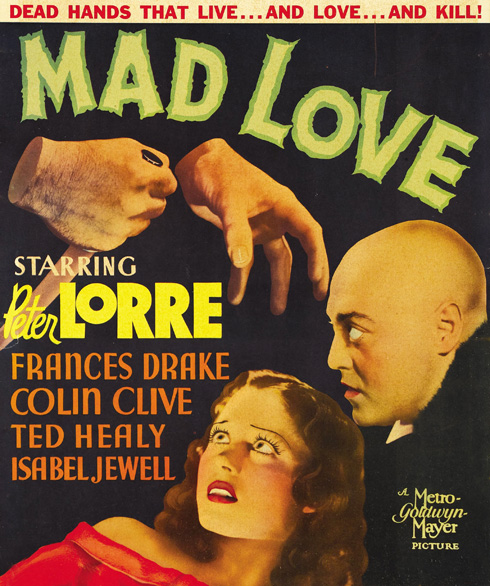 Thank the gods for the internet, huh? In this modern age, internet communities and online reviews give us a chance to discover films that would otherwise go well below our radar. It is was the case that I found this movie to be highly recommended by several sources and it did not disappoint. I have been a monster kid since I was a young one in the and read every horror movie history book I could get my hands on, but this movie never seemed to pop up in those mentions. Part of that is no doubt due to its oddity among its brethren. This is a not a monster movie as was so popular during those days. Instead it predates the more thriller oriented horror of the that would come later on, focusing instead on a deranged and slightly maniacal doctor longing for a love that he cannot have. Doing a little research on the movie, I also find that critics were not kind to it during its day, but have come around in the past few decades, probably another reason that it is more mentioned now than it was during its time. That seems to be a surprise because the movie is a horror fiend s dream. Based on a novel that had already been filmed as THE HANDS OF ORLAC with CALIGARI s Conrad Veidt. Directed by legendary cinematographer Karl Freund, with a script from Guy Endore, whose novel THE WEREWOLF OF Paris was a heralded classic made into the Hammer film CURSE OF THE WEREWOLF. The cast features the wonderful Peter Lorre in his first American role, along with Doc Frankenstein himself, Colin Clive. All of these parts together were almost certain to yield something worthwhile. The beginning of the movie sets a dark tone right from the start. Using the Grand Guignol stage as its backdrop, we are immersed in a world of chills, as each employee of the theatre is dressed in spooky costume, before our heroine takes the stage in a production that would make Mario Bava proud. From there, we go to a beheading, complete with shiny, sharp guillotine and gallows humor. While there are no fantastic monsters present (as in Universal s work of the time), there are certainly chills to mark this firmly in horror territory. The story strays from the plot of the earlier HANDS OF ORLAC by placing much more emphasis on the new character of Dr. Gogol, played by Lorre. He s the glue holding this movie together, as he displays impressive range. We know from the beginning that there s something a little off about him. Clearly, he s obsessed with the heroine and maybe a little too much with torture, beheadings and deathly theater. In an early scene, we see that he s a little bit socially backwards as he takes an opportunity for a peck on the cheek with our heroine as a chance to plant a deep kiss on her. From there, his obsession spirals out of control, just as much as his grip on sanity seems to be spiraling downwards. His plot to make Yvonne his own ultimately ends with a dastardly surgery and murderous plot. By the time he comes to dress as a dead serial killer to further his ruse with Orlac, it s clear that he s crossed from damaged goods to full- on maniacal villain. The directing of Freund is spot on, as always. His movies look incredible and this is no exception. Watch the early conversation between Gogol and Yvonne in her dressing room and the use of close ups for a director clearly in firm grasp of his craft. The movie would work almost as effectively on mute as it does with sound. I recommend this to any fan of early horror or thrillers. What it may lack in a memorable monster, it more than makes up for by presenting a good story with great characters.

Ted Healey and His Stooges (Moe Howard, Curly Howard, and Larry Fine) performed as comedians in vaudeville, and got small parts in a couple of movies at MGM in the early 1930s: Soup To Nuts, and Dancing Lady. The latter starred Joan Crawford and Clark Gable.

The Three Stooges accepted a contract offer from Columbia Pictures. They went on to star in over 180 short subjects from 1934 to 1958, and in about half a dozen feature films in the late 1950s and early 1960s.

Healey opted to stay with MGM. He also appeared as a police sergeant in one of the Philo Vance films, and as James Stewart’s sidekick in Speed (a drama about race car drivers).

The Hands of Orlac was remade again in 1964, with Christopher Lee and Mel Ferrer.