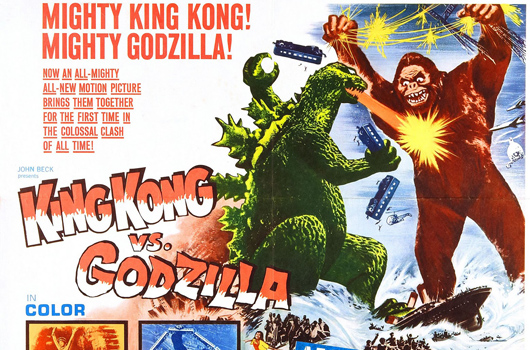 King Kong vs Godzilla was released in the USA on the 26th of June, 1963, some ten months after its release in Japan as Kingu Kongu tai Gojira.

Produced by Toho and featuring an all-Japanese cast, King Kong vs Godzilla was heavily altered for its English-language release with new scenes, sound and dubbing; ironically, though, its concept was based on an idea created by Willis O’Brien, the animator of the original King Kong (1933), although he was never credited for it. Kong’s opponent for the titanic clash was intended to be Frankenstein’s Monster, but various disputes over character ownership stalled the project until it came to Toho’s attention. The Japanese studio was keen to celebrate its thirtieth year in movie production, and used their own monster Godzilla as Kong’s adversary.

Following the film’s release, King Kong director Merian C Cooper attempted to sue John Beck (who had passed the original film concept to Toho); however, it transpired that he did not own the King Kong character as he thought, so his claim could not proceed.

The film starred Tadao Takashima, Kenji Sahara and Yu Fujuki, and was directed by Ishiro Honda. Special effects were created by Eiji Tsuburaya, who went on to work on Toho’s collaboration with the US’s Rankin/Bass, King Kong Escapes (1968). While the production team wanted to use Willis O’Brien’s stopmotion animation technique, this proved too costly, so suited actors were used instead.

The outrageous plot of King Kong vs Godzilla included million-volt power lines, a giant octopus attacking a village, and King Kong becoming drunk on berry juice; the film also has a consciously lighter tone, allowing for elements of humour in the elaborate fight sequences and an increasing appeal for younger audiences – a move which did not appeal to director Honda but was popular with Toho management.

There was a rumor among fans that the movie had two alternate endings. Supposedly, in the Japanese version, Godzilla won, and, in the American version, Kong won. AFAIK, however, the ending is the same in both.

In fact, IIUC, Kong was as popular as Godzilla in Japan.

The American version had some scenes added with Michael Keith as a reporter commenting on the action, similar to the first Godzilla film, which had added scenes with Raymond Burr when it was released in the USA.