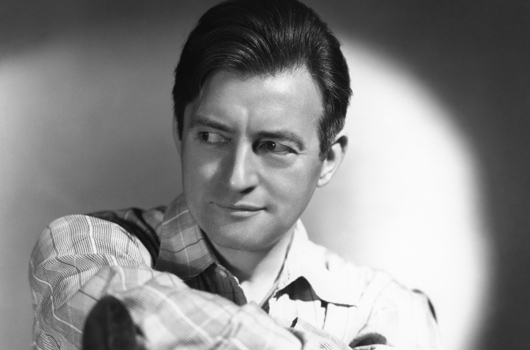 English stage and screen actor William Claude Rains was born on the 10th of November, 1889 in Camberwell, London.

Rains grew up with what his daughter Jessica termed “a very serious Cockney accent and a speech impediment” but, after making his theatre debut at the age of 11 in Nell of Old Drury, RADA founder Sir Herbert Beerbohm Tree saw huge acting talent in him, and paid for the elocution lessons necessary for him to become a professional actor.

Rains later became a tutor at the Academy, where his students included John Gielgud, who later remarked, after the former had become an international star, “He was a great influence on me. I don’t know what happened to him. I think he failed and went to America.”

Rains was active in the London Scottish Regiment in the First World War, alongside fellow actors Basil Rathbone, Ronald Colman and Herbert Marshall. During his service he was involved in a gas attack, which left him virtually blind in one eye for the rest of his life. By the end of the conflict, he had worked his way up from the rank of Private to that of Captain.

The actor began his theatrical career in earnest in London once the war was over, eventually moving to Broadway in the late 1920s. His break into films came relatively late, and his first screen-test was unsuccessful, but his soft-cadenced, distinctive voice was noted, and won him the title role in The Invisible Man (1933), which turned out to be the kickstart he needed.

Although Universal tried to manoeuvre Claude Rains into a horror career after the success of The Invisible Man, he resisted, making a wide range of diverse hits which ultimately led to him being the first actor to receive a million dollar salary for his role of Julius Caesar in Caesar and Cleopatra (1945). He was Bette Davis’s favourite co-star, and the pair made four films together, including Now, Voyager (1942) and Mr Skeffington (1944). His other notable horror credits were as Sir John Talbot in The Wolf Man (1941) and the title role of Phantom of the Opera (1943). To both these characters he brought his trademark restrained performances which still hold up today, a trait for which he thanked director Michael Curtiz, who had taken him to one side after hearing his failed screen test to “teach me the more understated requirements of film acting, or ‘what not to do in front of a camera’”.

Rains became a naturalised citizen of the United States in 1939, and went on to marry six times, divorcing all but his last wife, Rosemary Clark Schrode, whom he survived. His only child, Jessica, was born to him and his fourth wife, Frances Propper, on the 24th of January, 1938.

Claude Rains died from an abdominal haemorrhage in Laconia on the 30th May, 1967, aged 77. He was buried at the Red Hill Cemetery in Moultonborough, New Hampshire.

0138am 13/02/2021 claude rains? i would only have known the films he starred in, not the actor or the name – is that due, in part, to the aforementioned understatement and/or understated work ethic required of him, deemed necessary of him, to carry his acting career forward? probably. “failed and went to america”? ha!! no wonder we brits get shirty when we lose one to them over there – what with their perpetual impeachments and tainted weary glories… i know of others who enjoyed rains more than myself – myself being relatively new to him as a person – re the above: my having seen his films but not having acknowledged him per se is testament to his understated presence as an actor or my not specifically engaging with the people who act… this is nought new as i can enjoy a film and not particularly give two hoots a to who has starred in said film. the story is the thing. and i believe that. i must say i very much enjoyed his invisible man characterisation – he seemed to present a genuinely peeved performance. due to not wanting to star, losing out on more weightier roles or being peeved at the direction the film was taking…? as a horror fan i have no qualms about his appearance in the invisible man and can enjoy this particular film ad nauseam. the peeved persona approach served him well for this role – to my way of thinking… which now brings me on to other more personal matters – is it worth reading up on claude rains? have the old literary hacks done him justice or have they deemed it necessary to make him more florid and dandified than was required? if he is of the old london set then the odd expletive would have run throughout his life would it not..? i am also requested to ask – due to the fact that no one has gotten back to me on this, save the kindly american (hahah!!! lol) who has seen fit to suggest i can get hold of this title from him/herself if i fork out too much in shipping costs for the privilege – is it possible that you can tell me where i can get hold of a copy of: the man who regained his head? it is a film i need to watch. NEED TO being the operative words. many thanx; regards jp sutcliffe, limey, UK.