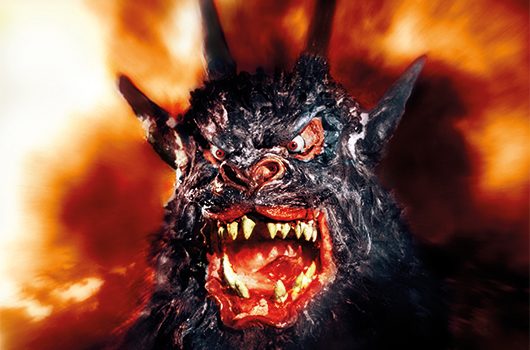 When Night of the Demon hit British cinema screens in 1957, it was part of a double-bill with Nathan Juran’s 20 Million Miles to Earth, and made relatively little impression on either audiences or critics despite its cast-iron reputation today.

Basing it on Montague Rhodes James’ short 1911 ghost story ‘Casting the Runes’, screenwriter Charles Bennett had initially commenced his quest to bring the dark fable to the big screen in 1954. Bennett, who had previously worked with Alfred Hitchcock on the likes of The 39 Steps (1935), had long been a fan of James’ tale of alchemy and occultism and, contacting the novelist’s estate, secured the rights to the story. 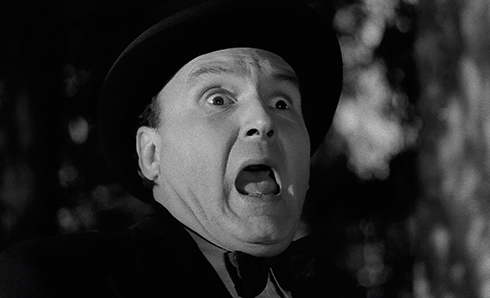 Released as Curse of the Demon in America, the film has a devout following today, although arguments as to whether the fire demon should have been shown or not have raged for decades. The ins and outs of this debate can be traced right back to Bennett’s inaugural draft, entitled ‘The Bewitched’, which is unequivocal in its intention that the beast should be merely suggested rather than revealed. By January 1955 producer Marcel Hellman had submitted a copy of Bennett’s screenplay to the BBFC, who made it abundantly clear that the film would receive an ‘X-certificate’ rather than the ‘A’ its potential makers were seeking.

After getting a more favourable nod from the Motion Picture Association of America, Hellman tried once again to get the property past the BBFC, but they stood their ground, insisting that any iteration based on Bennett’s interpretation could only ever be awarded an ‘X’. Hellman dropped the project, but the next pair of serious hands it fell into would heavily dictate its direction henceforth. “I was over in England directing a series for television,” Bennett told author Pat McGilligan in 1986. “The day before I was coming back from England, a guy by the name of Hal Chester turned up and said ‘would you sign this contract for Demon? Because I can set it up with Columbia – but I’ll need your signature’. So I was in a hurry to catch the goddamned plane, I said yes. When I got back to America, I learned to my surprise that Dick Powell’s right-hand man had set it up for me to shoot the picture at RKO – with me as director. That was exactly what I wanted but, goddamit, I had signed this letter of intent before leaving England.” 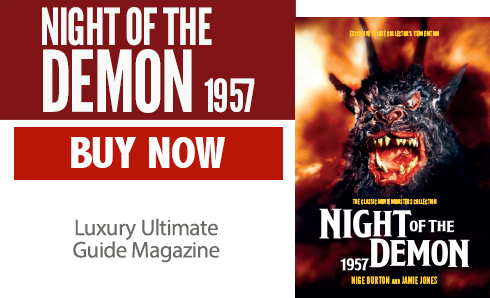 From the BBFC’s initial perusal of the script censor Audrey Field confessed she was somewhat vague as to the true nature of the demon, eventually reaching her own conclusion that it was a ‘nebulous horrible dinosaur’. This had been Bennett’s intention, but by the time Chester had allegedly reworked it for production by Sabre Films Ltd, a British company of which he was a director, the reference was far less subtle, describing ‘the loathsome and bestial thing’.

According to Chester, the finished idea of the movie’s adaptation had been pretty much his from the start but, while both Bennett and Chester receive a credit in the final film, one contributor’s name is absent, that of blacklisted American director and writer Cy Endfield, who lived in Britain from 1953 until his death having fled his native country after being named as a Communist by the House Un-American Activities Committee. 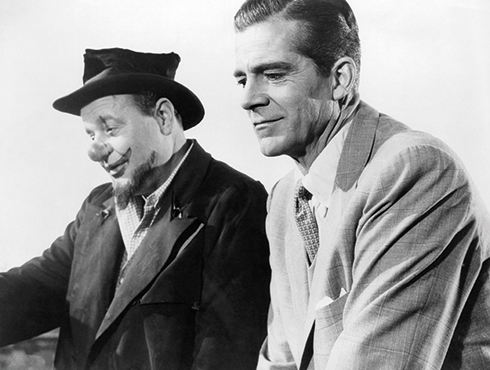 If Chester’s insertion of a medieval fire demon in full shot is considered crass by many standards, one must take such a criticism in context. Subtlety was not a good seller in late fifties America, and that was where the cash was. As underplayed and cerebral as Bennett’s original script may have been, Chester was a successful producer clear about who his target audience were, and the drive-in kids of the US wanted real live monsters. Night of the Demon had to stand a good chance of making money in order to attract the financial backing of Columbia.

What ultimately saved the day for Chester in all probability was his choice of director, French-born Jacques Tourneur, the genius who had teamed up with producer Val Lewton to turn out some of the most respected horror movies of the 1940s for RKO. The pair’s noir psychological nightmares had plied their terror directly from the shadows, exploiting the audience’s fear of the unseen rather than Universal’s larger-than-life monsters. Despite Chester’s huge horned demon dancing directly across the stage, Tourneur’s pared back style suited Bennett’s atmosphere of pervasive evil. Even the British release poster opts for ambiguity, asking in its strapline: ‘Chosen…singled out to die…victim of his imagination or victim of a demon?’ Ironically, such a stance was a pure departure from James; in ‘Casting the Runes’ there is no room whatsoever for doubt: the demon is unquestionably real. 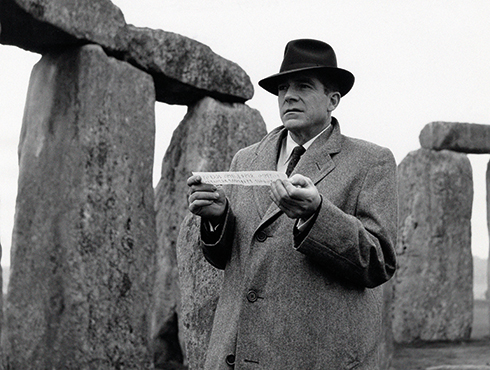 With regard to the demon itself, long before I saw the film I had been treated to images of it in my plethora of horror film magazines and books, and so its appearance came as no shock to me whatsoever. It is often argued that it is cheap puppetry in a style meant to emulate the great stop-frame animation techniques of Ray Harryhausen, but to me there is something more fluid about this ancient cloven-hoofed monstrosity which lends it an air of malevolence that jerky Dynamation – charming as that process is in its place – could never have achieved.

Responsible for the beast’s look was production designer Ken Adam, a Berliner who would go on to mastermind the sets for the James Bond films of the 1960s and 70s. Adam was vocal in his disapproval of showing the creature so explicitly. “The one thing I didn’t really want to do was design the monster,” he would later recount, “and there we had an [argument]. Jacques Tourneur didn’t want it either, but [the producers] felt that the audience must see the monster. … If I remember rightly the decision was made while the film was in production because we kept arguing about it. It was Hal Chester, the American producer, who felt that ‘You cannot cheat the audience. They expect to see a demon, so give them one’, whereas Jacques and I felt that by showing the smoking footprints it was sufficient evidence of that supernatural element.” 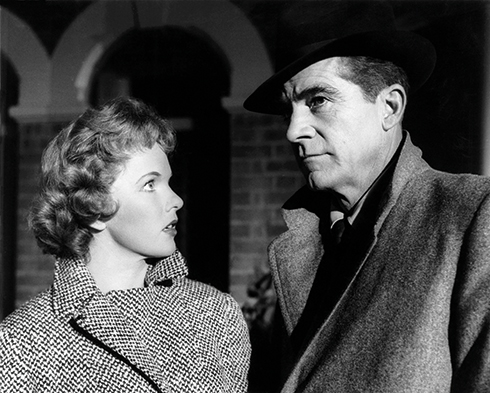 The decision for so many crew members to later distance themselves from the inclusion of the creature is a curious one; by the time filming was scheduled to start, the scripts were completed and ready for production, and the demon had moved from ephemeral to corporeal. It was always intended to be present. It seems Chester’s word was final, although Bennett would find it very hard to forgive him: “Hal Chester, if he walked up my driveway right now, I’d shoot him dead,” he declared in his memoirs.

It could of course be argued that whatever your take on the matter is, Chester’s vision for the film is what actually makes it so enduring. By revealing the creature within the first few minutes, Night of the Demon shows its hand almost completely, thus rendering Niall MacGinnis’ performance as occultist Julian Karswell yet more pernicious as everything he does is unquestionably real. And yet there is room for doubt: as the petrified Professor Harrington (Maurice Denham) flees in fear for his life, his sighting of the approaching monster could be a mere omen for what is about to occur. His subsequent demise as he reverses his car into an electricity pole and the pylon collapses on him is a total accident, and need not involve anything remotely supernatural but may simply have been brought about by extreme terror. 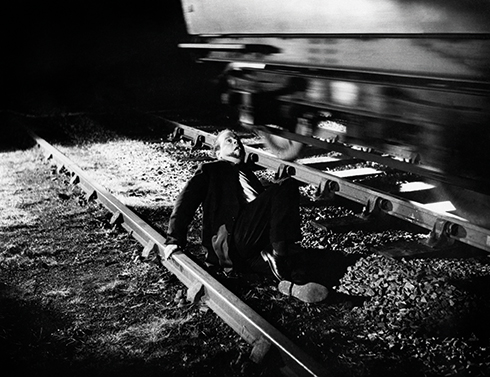 There is, of course, no room for such ambiguity in the final scene and the film is all the better for it. As a horrified Karswell realises that John Holden (Dana Andrews) has handed the runes back to him and the game is up, there is no mistaking his being trampled and clawed to death by the devil of his own conjuring… unless of course he really was hit by an oncoming train.

Night of the Demon can still pack a frightening punch today, and is apt to leave a lingering taste of evil on the palate. Andrews was cast to provide the film with a strong pull for US cinemagoers, and he brings a believable cynicism to the part of Holden, gradually allowing himself to succumb to the dread of his situation prophesied by the more believing Joanna Harrington (Peggy Cummins) and Mrs Karswell (Athene Seyler), mother to the main antagonist. With excellent turns from Reginald Beckwith as medium Mr Meek and Brian Wilde as farmer Rand Hobart, it is a movie which stays with you long after the final credits have rolled, thanks too in no small part to Clifton Parker’s superb score. 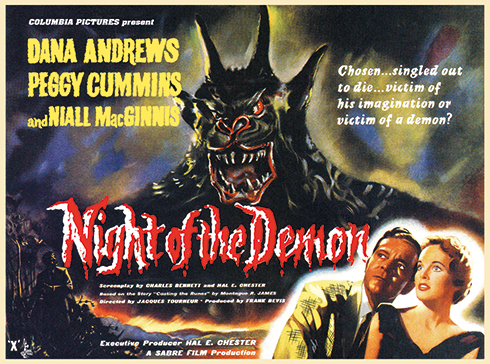 Tourneur’s direction is as taut as in any of his enterprises with the venerable Lewton, and it seems that reading between the lines reveals his resignation to the appearance of the demon, but perhaps not quite so obviously. Either way, there can be little argument against it being a classic design, and whether you believe it should or should not be there, one fact cannot be escaped: James’ demon in ‘Casting the Runes’ was intended to be very real indeed, and if one is to make a film of any of his ghost stories, it would surely not do it or him any good to alter that base premise. The argument, therefore, about Night of the Demon must be about how the beast is shown rather than whether, but however it came about, and whatever disagreements there were about its protracted production, it endures for me as one of the greatest horror films of the last century.

You can read this article in full in Classic Monsters of the Movies issue #22: 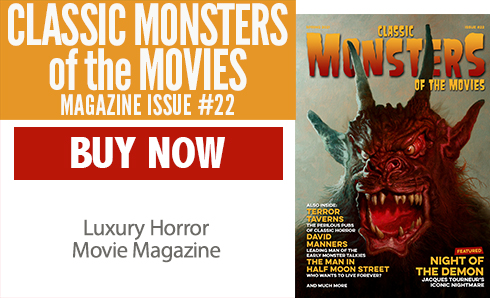