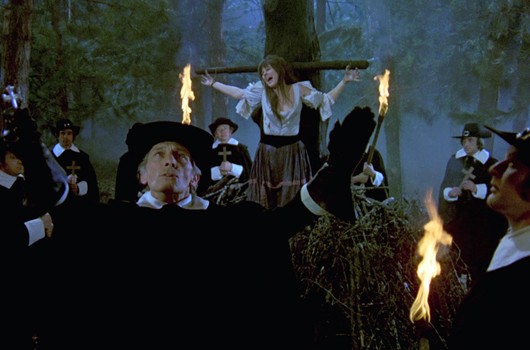 Ah, the joys of seeing double! The House of Hammer is back again with Twins of Evil, a dark and moody horror film that has something for everyone in it: vampires, devil worshipping, two Hammer glamour girls (Madeleine and Mary Collinson) and some heavy duty gothic set pieces.

And the violence is also upfront and present, as the film starts with an atmospheric introduction as a busty maiden is chased through the woods by some puritanical looking dudes in black and she is then burned at the stake. This is the proper way to start a horror film.

We begin with the arrival of the fetching twins via horse drawn carriage and immediately we notice that there is something lively about the girls; they are brightly dressed, and we learn that they are arriving from Venice to live with their aunt and uncle: Katy Weil (Kathleen Byron) and Gustav Weil (Peter Cushing). Gustav Weil is a strict Puritan and his general outlook is stern; he immediately chastises the girls for not wearing the traditional black of mourning. The girls explain that they feel that they have already done their time mourning their parent’s deaths, and besides that, they didn’t pack any black clothing. Weil’s face is affixed into a perpetual frown, and his look of displeasure is readily apparent. The girls will quickly learn that things are different here in Karnstein than in Venice. 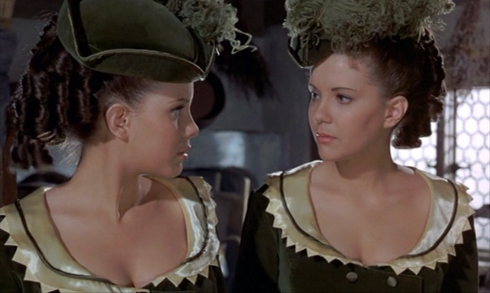 Apparently Weil is the leader of a group of rogues that call themselves “The Brotherhood” and that they generally help keep the law in Karnstein; the execution of the young girl at the start of the film was their handiwork, and they are generally on the lookout for anyone that may possibly be suspected of witchcraft. Residing in the large castle that overlooks the village is Count Karnstein (Damien Thomas) and he is suspected of being a wicked individual. The two sisters are both unhappy with the current situation, but it is the stronger willed of the two, Frieda, that will look to escape her uncle’s wrath, and the Count looks like a good place to start.

No sooner than the first night there, Frieda is on the prowl, and she finds her way to the Count’s residence where she is witness to the Count dabbling in some black magic as he conjures up the spirit of his ancestor Countess Mircalla Karnstein (Katya Wyeth); it is she that transforms the Count into a vampire. Seems that the Count has been doing some human sacrifices and some local girls have gone missing, hence the reason for the existence of the Brotherhood. Frieda soon falls under the Count’s mesmeric influence and is in turn bitten and turned into a female vampire, but is wary of biting her good sister, Maria; the Count presents Frieda with the gift of a beautiful chained young girl to appease her unearthly desires. 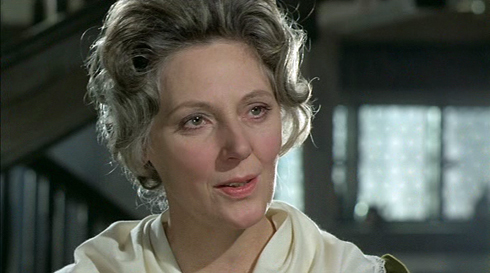 Meanwhile the good sister, Maria, has fallen in love with handsome teacher Anton Hoffer (David Warbeck), but he is drawn to the bad twin, Frieda. A student of superstition, Anton is interested in the disappearances of the local girls, but when his sister, Ingrid Hoffer (Isobel Black) becomes a victim, he takes on a more defined position. One night Frieda attacks a member of the Brotherhood and she is captured by her uncle and his gang; they lock her up for safe keeping, but before the clan can burn her, the Count and his followers spring Frieda from lockdown and instead substitute good twin Maria in her place. Suddenly it’s like the Patty Duke Show, but in the early 1800’s, as Uncle Gustav can’t tell one sister from the other.

Hoffer makes a connection with Gustav as he explains that vampires cannot be killed from burning, and that they are not afraid of fire, but a stake through the heart will do the trick. Or if necessary, a decapitation with axe will also do. Before the good sister gets a permanent hotfoot, Hoffer interferes and approaches Maria with a cross; she of course is not repelled by the sign of the holy icon. It is then time for the Brotherhood to declare war on Count Karnstein, and Gustav and his men raid the castle for the final time. Frieda is beheaded by Gustav, and the Count ultimately kills him, then Hoffer steps in and spears the vampire in the chest. The ending is a great battle between good and evil, but the viewer must ask themselves, of the two, really who was the more evil? 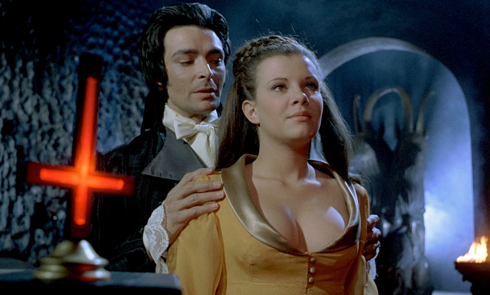 Frieda (Madeleine Collinson) is drawn to the dark side, and to Count Karnstein (Damien Thomas), in Twins of Evil (Hammer 1971)

Director John Hough (Legend of Hell House) does an impressive job with the crazy plot for Twins of Evil; in reality this is the third film of the sexy vampire series of films that Hammer produced in the 70s. The series started with Lust for a Vampire (1970, directed by Jimmy Sangster) and its sequel of sorts, The Vampire Lovers (1970, directed by Roy Ward Baker). These films were heavy on nudity and hinted at lesbian vampirism; they were also a favourite of teenage boys worldwide.

All three films were loosely based on characters featured in the J Sheridan Le Fanu, novella Camilla. Synapse Films has released Twins of Evil on a great DVD/Blu-Ray two disc that is well worth the money with vivid and striking color presentation and excellent sound. 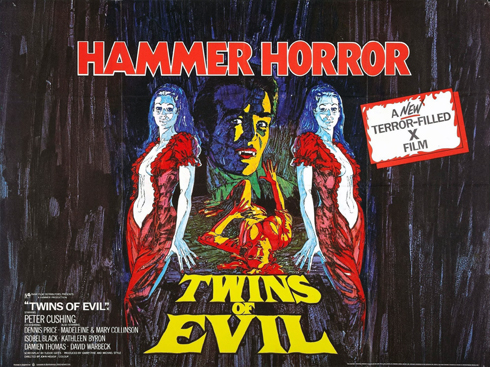 A great later hammer vampire film, the best of the Karnstein trilogy.