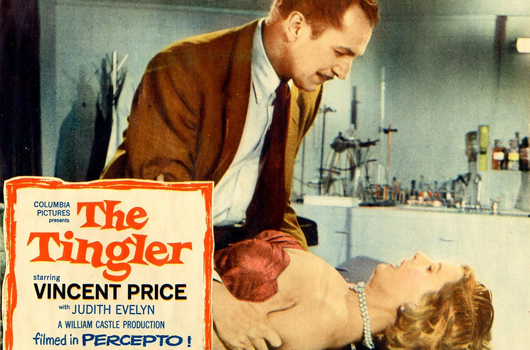 Cult classic shocker The Tingler was released by Columbia Pictures on the 29th of July, 1959, allowing Vincent Price to further cement his reputation as a horror icon.

The plot hinges on the outrageous pseudo-scientific premise put forward by Dr Warren Chapin (Price) that every human being plays host to a parasitic insectoid creature, the Tingler of the title, which feeds on fear and is responsible for the tingling sensation in the spine when someone is scared. If the creature is allowed to grow too strong, it crushes the spine, causing death. The cure for this infestation? A hearty scream.

As is essential within the horror genre, experimentation and malice go hand in hand, and the death of a mute woman, who could not scream to weaken her own Tingler, places Chapin in a battle of wits with cinema owner Oliver Higgins (Philip Coolidge). Combining the scientific and the supernatural, with an excellently-rendered LSD trip along the way, the movie confounds expectations at every step.

Both written and directed by William Castle, The Tingler is noteworthy for several reasons. It was one of several of Castle’s films to use gimmickry as a key selling tool, this time in the form of the vibrating “Percepto” devices attached to some cinema seats, as well as hired “viewers” employed to scream and faint during screenings. In the climax of the film, the Tingler escapes into a theatre; integrating this into the whole experience, Castle broke the fourth wall by using a voice-over from Price urging the audience not to panic, but to “scream! Scream for your lives!” Elsewhere in the movie, a short colour sequence adds additional horror elements to proceedings.

Though The Tingler received mixed reviews at the time of its release, its camp credentials were undeniable, and it is now regarded as a unique entity, a compelling and inimitable branch of the classic horror movie tree.