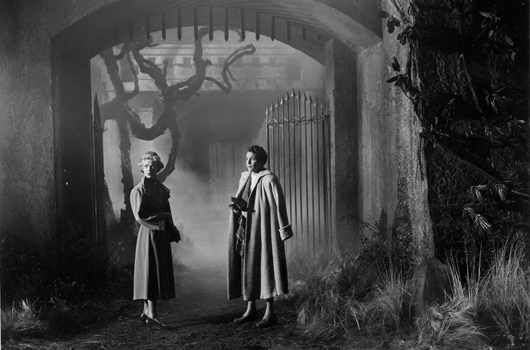 The Maze, director William Cameron Menzies’ 3-D atmospheric horror film for Allied Artists, was released on the 26th of July, 1953.

Starring Richard Carlson and Veronica Hurst, this suspenseful, haunted-house style mystery thriller has so much going for it, and none of it is spoiled by the usual overblown 3-D crowd pleasers.

Unlikely Scotsman Gerald MacTeam (Carlson) abruptly breaks off his engagement to pretty Kitty Murray (Hurst) after receiving a communication about his uncle’s death. He repairs at once to the remotest Scottish castle possible, henceforth giving his sweetheart an inexplicably wide berth. 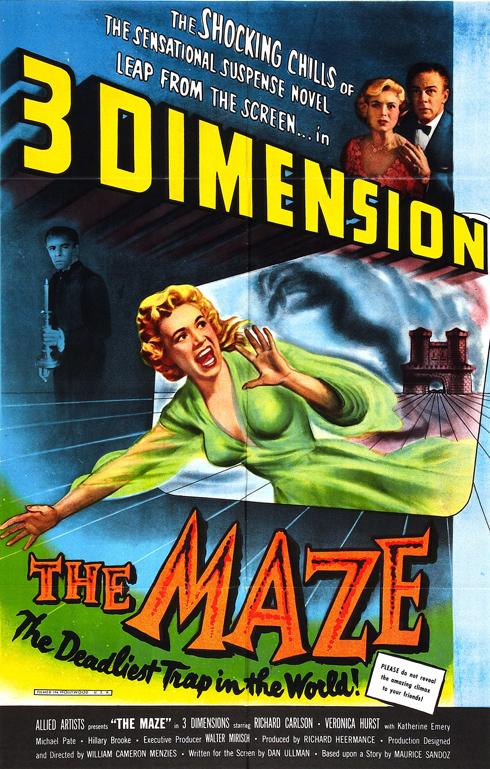 Perplexed but undeterred, she travels to the castle in the society of her aunt (Katherine Emery) to confront the beau about his mysterious behaviour. The two get a brusque reception, being made anything but welcome by a Gerald who seems to have aged twenty years.

Locked in their rooms at night, they hear strange goings on without and so Kitty endeavours to walk abroad one night and, aunt in tow, ventures outside to the maze, which seems to be central to all the commotion.

It’s not long before they discover the truth in the form of a giant frog, the real owner of the castle, who starts so wildly upon seeing them that he runs straight back up to his room and hurls himself out of a window to his death.

This, explains Gerald, was Sir Roger Philip MacTeam, Bart, who was born in 1750 with his foetus having never developed beyond the amphibian stage, rendering him a large, intelligent frog. With the palaver over, Gerald can now get on with his life. Happy ending. 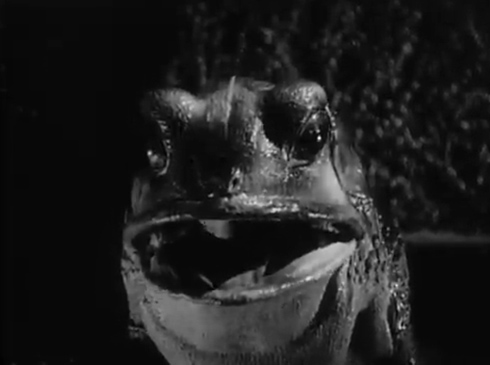 Apart, of course, for poor Sir Roger; even the apparently ludicrous outcome of the film is well executed, and it’s difficult not to have a flicker of sympathy for the poor, amphibious wretch, even if he has behaved a little on the selfish side enslaving generations of the MacTeam men folk to look after him and guard his secret.

However bizarre the film’s punchline sounds, it is handled well enough to almost be believable, and The Maze remains an enjoyable film which combines the elements of horror, mystery and fairy tale with a finesse that makes it eminently watchable time and again. There is nothing remotely like it in the annals of cinema, and it is partly this originality which makes it so hugely entertaining.