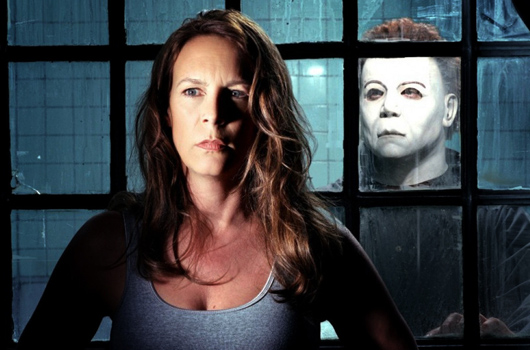 Halloween: Resurrection was released on the 12th of July, 2002, the eighth and final instalment in the original series.

Jamie Lee Curtis reprised the role she created in 1978 as beleaguered Laurie Strode, facing off against Shatner-masked sibling Michael Myers for the last time. Like its predecessor, Halloween: H20 (1998), the film sidesteps instalments 4, 5 and 6, focusing on the original concept of Laurie’s ongoing battle to prevent Michael’s killing sprees. Halloween: Resurrection was directed by Rick Rosenthal, who also directed the nerve-shattering Halloween II (1981).

Trading on the huge popularity of reality TV, Halloween: Resurrection sends a group of teenage competition winners to spend a night in Michael Myers’ abandoned home under the direction of Busta Rhymes and Tyra Banks. Of course, it’s Halloween night, and Michael himself is never far away, so the cameras installed throughout the house are able to capture the ensuing costume switches, made-for-TV setups, and grisly murders, as well as enabling a game of cat-and-mouse between Myers and his predictably naive prey who, in defiance of all horror film logic, split up to cover more ground.

The movie culminates in a cliffhanger ending which would have left scope for further instalments, were it not for Rob Zombie’s 2007 reboot of the original, which took everyone’s eye away from where the series might go next. Sadly, the plot dictates that Jamie Lee Curtis’ presence would be somewhat difficult to explain in any continuation of the story.

Halloween: Resurrection received average reviews, with many critics decrying it as the perfect example of an unnecessary sequel. However, Curtis’ presence brings undeniable class to proceedings, albeit briefly, and the Halloween completist will find it hard to resist.