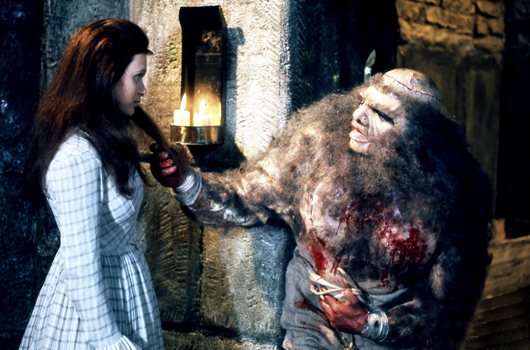 Frankenstein and the Monster from Hell (Hammer 1974)

On 2nd May 1974, Frankenstein and the Monster from Hell enjoyed its cinematic release.

Directed by Hammer stalwart Terence Fisher, the film featured Peter Cushing‘s final performance as Baron Frankenstein, with David Prowse as the titular beast – the only actor to play the Frankenstein Monster more than once for Hammer. In some markets, the film was released as a double-bill with Captain Kronos: Vampire Hunter. Although Frankenstein and the Monster from Hell did not fare well in its day, time has been kind, and the film is regarded warmly by fans and critics alike.

Around 2015 I was lucky enough to meet David Prowse at the Cardiff Film and Comic Con. I explained to him that his interpretation of the monster was one of the first real Horror movies I ever saw. He said he is always amazed at the amount of people who have told him this and he also said how good it was to have worked with Peter cushing again a few years later on Star Wars. Although it was sadly obvious that David Prowse was quite ill in 2015 he wanted to meet every person that had come to see him and was a real Gentleman.