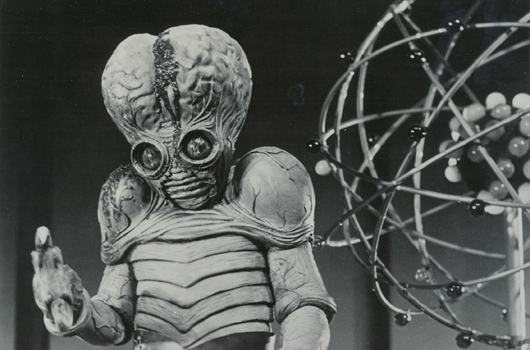 Universal’s first science-fiction feature in full colour, This Island Earth, was released on the 1st of June, 1955.

Directed by Joseph M Newman, the film was based on the novel of the same name by Raymond F Jones and starred Jeff Morrow as the alien Exeter, Faith Domergue as Dr Ruth Adams and Rex Reason as Dr Cal Meacham. In the nineties, the film came in for a deal of criticism, but it must be remembered that it was highly praised in its day for what were considered ‘sensational’ special effects, a masterful script and ‘eye-popping’ colour prints by Technicolor. 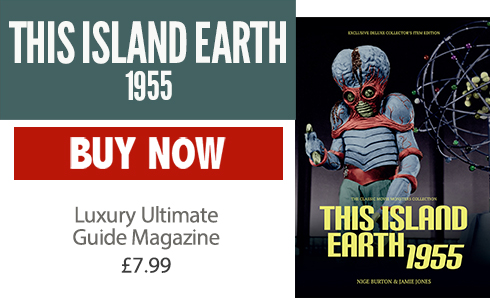 Generally, This Island Earth has fared quite well critically since its original release, and is considered as good an example of a science fiction film as any subsequent era has produced and, of course, it gave us a brand new Universal Monster: the bug-eyed Metaluna Mutant.

This definitely deserves a spot among the great classic sci-fi flicks of the 1950s. The story and special effects (in the pre-CGI era) make it a worthy addition when considered in the context of that decade. A friend of mine had the great fortune to meet with Jeff Morrow and his wife a few years before Morrow’s passing in 1993. Morrow mentioned how much he enjoyed this movie (his first venture into sci-fi) and being remembered for his role in it.

They need to go back and make movies like this again, and not use that fake looking CGI. This Island Earth stands as an example of when you have a good story, Good acting and great special effects. They definitely do not make films like this anymore.

Saw this flick in my jammies at the drive-in movies. Made a big impression on me, as well as some famous movie producers. You’ll see this guy on a television set in the background of at least one major sci-fi movie.