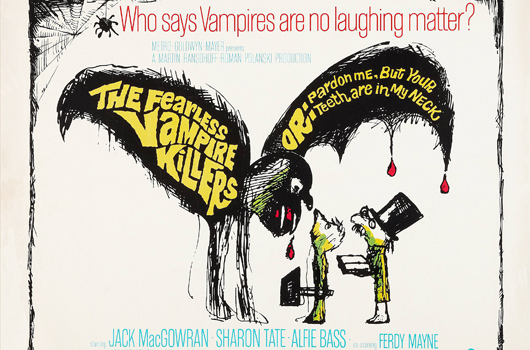 Dance of the Vampires (Filmways 1967)

Roman Polanski’s classic horror spoof, Dance of the Vampires, was released in the UK on the 2nd of June, 1967.

A wonderful nod to the Hammer classics of the time, the film shows off Polanski’s directorial vision to the full, augmented by the fact that his success with Repulsion (1965) had ensured he had an A-picture budget for the first time. Production values were lavish, if a little capricious at times, with cast, location and format changes being made after filming had begun.

During the portion of filming in the Italian Dolomites, numerous local craftsmen were engaged to build coffins as props for the ball scene. Such was the scale of the production that notices had to be placed in hotels in the area, reassuring tourists that the ubiquitous caskets were being used for a film, and that a plague was not in fact rampant in the locality.

The use of costly sets in England, as well as expensive location shoots in the Alps, elaborate costumes, a sterling cast and excellent cinematography by Douglas Slocombe, make Dance of the Vampires both beautiful and stylish to look at. The plot, though simple, is elegantly executed and sees Professor Abronsius (superbly played by Jack MacGowran) travel to the heart of Transylvania with his assistant Alfred (Polanski) in search of vampires. They end up battling the evil forces of Count von Krolock (Ferdy Mayne) and his gay son Herbert (Iain Quarrier, dubbed by an uncredited Vladek Sheybal in finished prints) in an attempt to rescue Sarah (Sharon Tate), the beautiful and buxom daughter of Jewish innkeeper-turned-vampire Shagal (Alfie Bass) who, when an attempt is made to fend him off with a crucifix, shrieks excitedly “Oy vey, have you got the wrong vampire!” Enhanced to perfection by Krzysztof Komeda’s melodic masterpiece of a score, the film builds to its climax at the titular vampiric ball, with a stunning shot in which the three main protagonists find themselves the only ones to cast a reflection in a huge mirror whilst in a room full of dancing vampires. To film the scene, Polanski had an exact copy of the ballroom set built behind a sheet of glass, using doubles for the actors as seen from behind. Rumbled, Abronsius, Alfred and Sarah flee the castle, but are relentlessly pursued by evil hunchback henchman Koukol (Terry Downes). The film culminates in a crazed, snowbound sleigh ride of terror.

To Polanski’s horror, MGM chose to market the film as a farce, changing its name to The Fearless Vampire Killers, or Pardon Me, But Your Teeth Are in My Neck, and the studio’s Supervising Editor, Margaret Booth, in concert with Post Production Manager Merle Chamberlain, cut and remixed the film to try and make it “kooky and cartoony”. Although it ostensibly still works, it has as a result lost some of the Central European fairytale folklore feel that the director intended, but remains, according to sources close to Polanski, the film in his career with which he was most satisfied.

Absolutely loved this movie – feels way ahead of its time to me. And the music to the opening credits is amazing!