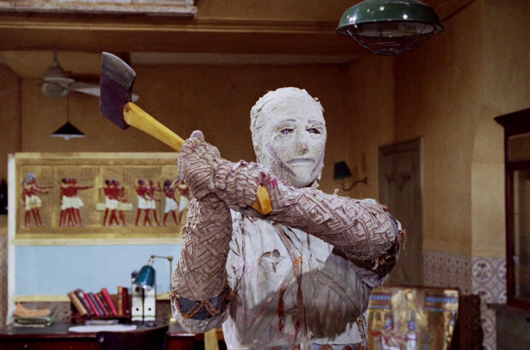 On the 18th of May 1967, The Mummy’s Shroud was released as a double-bill with Frankenstein Created Woman.

Written and directed by John Gilling, who had worked on such previous Hammer hits as The Shadow of the Cat (1961) and The Plague of the Zombies (1966), the film starred André Morell, John Phillips and David Buck, with Maggie Kimberley and Elizabeth Sellars as the female leads. The Mummy itself was played by Eddie Powell, Christopher Lee’s regular stunt double, and the narrator – usually believed to be Hammer stalwart Peter Cushing – was actually actor Tim Turner. The film was Hammer’s final production to be made at Bray Studios; operations later moved primarily to Elstree Studios with occasional diversions to Pinewood. While the film was not received particularly warmly at the time, it is now celebrated by fans as a perfect example of Hammer doing what they did best.

I was only six years old when I saw “The Mummy’s Shroud” on a double bill with “Frankenstein Created Woman” with my mother Ailean at a theater in Regina, Canada early 1967. It was really scary and gave me one memorably sleepless night where I lay awake in the dark, wondering if there really was something out in the hallway. This movie didn’t deserve its bad reviews. The cinematography and Don Banks’s music, especially when the mummy first comes to life and stalks Andre Morell, are first-rate. Every now and then, I take this DVD out and watch it. It never gets old for me. Fans who live in London, England, will also perhaps know that the design of the mummy is based on a real mummy on display in the London Museum. I was delighted to see this when I visited London in 1995.

Thanks for your comment Don – we, too, think this movie is really underrated. Eddie Powell’s Mummy had a real sense of menace and looks fantastic on the restored Blu-Ray edition.