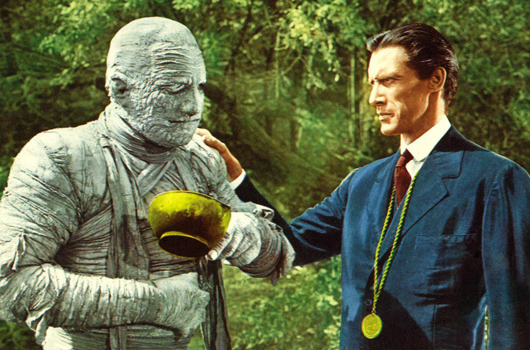 The third in the Kharis series, Universal’s The Mummy’s Ghost was released on the 7th of July, 1944, and provided Junior Chaney’s second outing under wraps.

Despite slipshod and inconsistent scripting by Griffin Jay, Henry Sucher and Brenda Weisberg, first time horror director Reginald LeBorg managed to turn out one of the studio’s most impressive sequels, and The Mummy’s Ghost stands apart from its two Chaney stablemates as probably the most credible entry into what was becoming a slightly jaded genre. 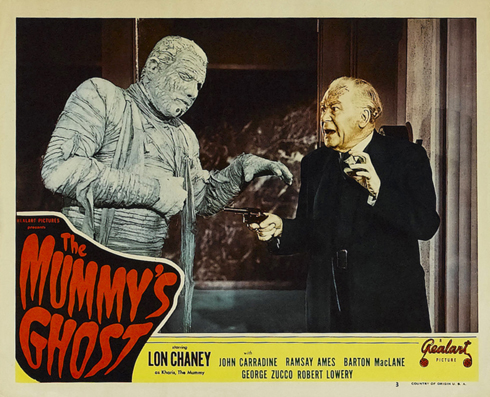 Bandage badinage: A lobby card for The Mummy’s Ghost (Universal 1944)

Undoubtedly, one of the main reasons for the film’s competence is the investment of some pathos in the Mummy himself, a quality which Chaney applies with skill and sensitivity. Rather than Tom Tyler’s marvellous but mindless, murderous thug of The Mummy’s Hand (1940) and the psychopathic fiend Chaney delivered for The Mummy’s Tomb (1942), Kharis, although still brutally dispatching four victims, shows a more noble, lovelorn side when he discovers the mummy of Princess Ananka at the Mapleton Museum. The relenting gods decide to bless the union at last, in an inexplicable and clumsy plot twist, but throw Kharis a few curve balls so as not to let the bandaged antihero have it all his own way. 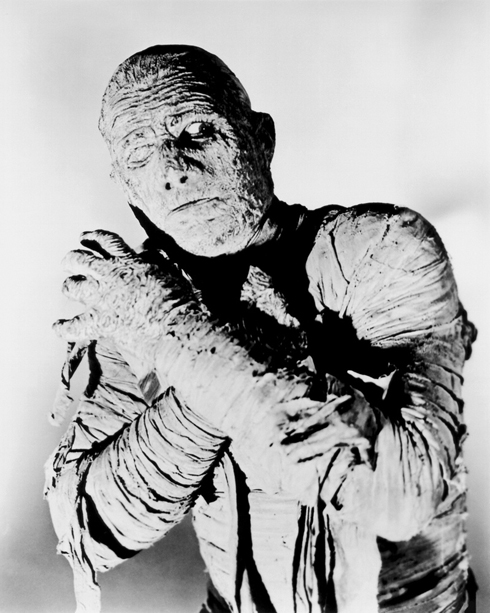 It’s a wrap: Lon Chaney as Kharis in The Mummy’s Ghost (Universal 1944)

John Carradine plays religious fanatic Yousef Bay with gusto, clearly relishing every moment and every line, while George Zucco is unusually ineffectual as the High Priest, rendered almost unrecognisable in Jack Pierce’s heavy make-up and, again inexplicably, back from the dead after his demise at the outset of The Mummy’s Tomb. The rest of the cast, including Robert Lowery as Tom Hervey and Ramsay Ames as Amina Mansouri, Ananka’s reincarnated alter ego, struggle with the poor script, and occasionally seem out of place and unbelievable, but these shortcomings, along with the inconsistencies of continuity, can be easily overlooked against the film’s overall high standard of production. 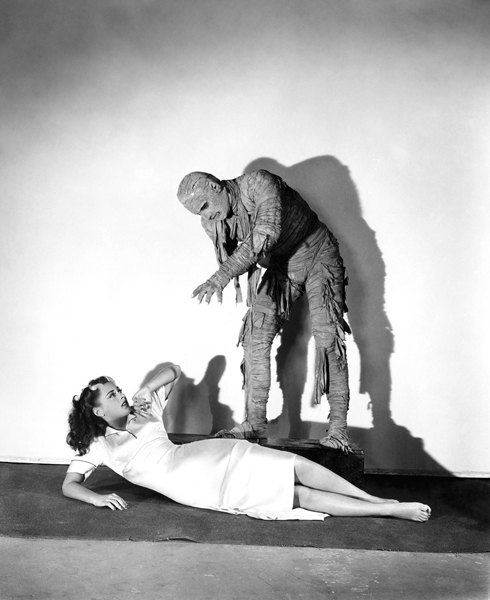 Chaney detested playing Kharis, and made no bones about airing his feelings on set: “I sweat and I can’t wipe it away. I itch and I can’t have a scratch.” LeBorg tried to accommodate the 6’4”, 220lb star; after gruelling takes, Chaney would be partially unwrapped and allowed to sit in the shade for a few minutes before the bandages, soaked with a specially formulated liquid to age them, had to go back on.

An overview of The Mummy’s Ghost some seventy years on renders it a satisfying sixty-one minutes in the Universal Monsters saga, and LeBorg made the most of what he had, teasing out some pleasing moments along the way, and executing a nicely orchestrated finale, which eschews the idea of a happy ending, and sees the reincarnated Ananka age hideously before sinking into a swamp with her beloved Kharis. “We discussed the finale with [Associate Producer Ben] Pivar,” said LeBorg, “and I said, ‘Why not let Amina sink with the Mummy? Why should there always be a happy ending?’ Somebody else said, ‘No, we might make a sequel.’ I told him, ‘The Mummy is always coming up – Ananka doesn’t have to!’”

Which paved the way nicely for The Mummy’s Curse, the final episode, later that year. 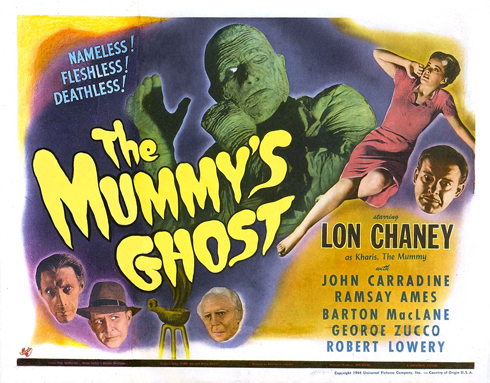 Back from the dead. Again: Original theatrical release poster for The Mummy’s Ghost (Universal 1944)