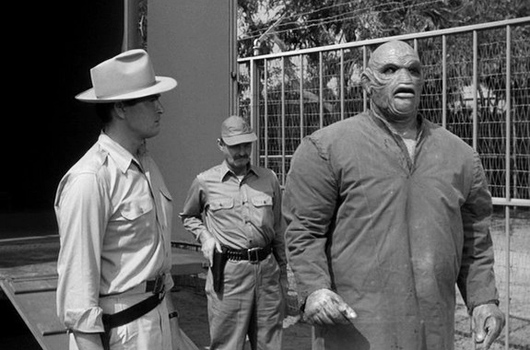 Creature Walks Among Us, The (Universal 1956)

There is a popular belief that movie sequels – particularly by the second in any given franchise, and especially in the horror genre – have run out of steam sufficiently to render the effort lacklustre, formulaic and worthy of being consigned to the ‘shouldn’t have bothered’ bin. At Classic Monsters, we often try to challenge this preconception, but seldom as vehemently as with Universal’s third entry into their popular Black Lagoon series, The Creature Walks Among Us (1956).

The studio had stumbled upon a rich seam of revenue with the original Creature From the Black Lagoon in 1954, and the following year’s Revenge of the Creature gave the audience more of what they craved. By the third entry it was time to take the action off at a bit of a tangent, and John Sherwood’s direction of Arthur Ross’s story and screenplay certainly accomplished this, with mad scientist Dr Barton (Jeff Morrow) hellbent on taking the Creature out of his environment.

Despite the reticence of colleagues Thomas Morgan (Rex Reason) and doctors Borg and Johnson (Maurice Manson and James Rawley respectively) the scheme is undertaken, and the now Gill-less Man starts to display human traits and appearance at an alarming rate. 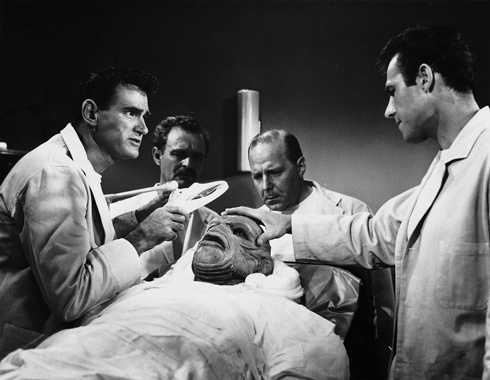 On land and in captivity, the hapless Creature is framed for the murder of Barton’s love rival Jed Grant (Gregg Palmer). Predictably, it all goes gills up once again, with everyone getting their comeuppance as Don Megowan’s hulking Creature heads beachward presumably in an attempt to turn back into Ricou Browning.

A worthy piece, neatly directed and believably acted throughout, The Creature Walks Among Us is further enhanced with a sophisticated score penned by Hans Salter, effortlessly combining the traditional Creature tritone melody with infusions of teasingly sleazy lounge music, perfectly suiting the mood of the washed up relationship between jealous Jeff Morrow and languid Leigh Snowden. 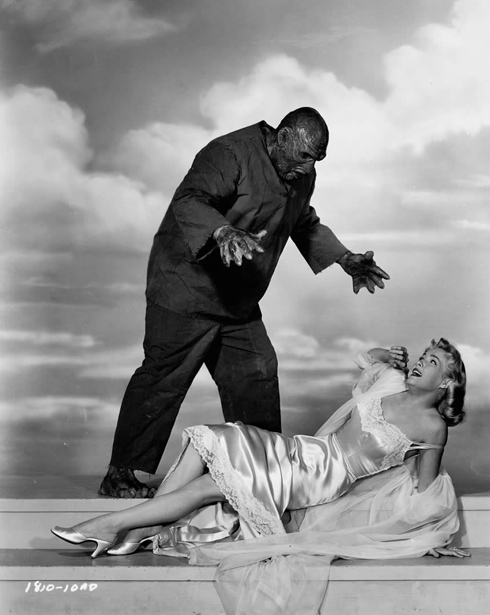 Beauty and the beast: The subtle undertones of the well-worn theme aren’t overly exploited between the Creature (Don Megowan) and Marcia Barton (Leigh Snowden) in The Creature Walks Among Us (Universal 1956)

An excellent round-off to a superb property, The Creature Walks Among Us sustains sufficient tension and genuine empathy for its main protagonist to make it a memorable set piece in its own right. Often unfairly maligned, this final instalment shows no real slip in standards, providing a satisfying denouement to a crashingly vibrant storyline. 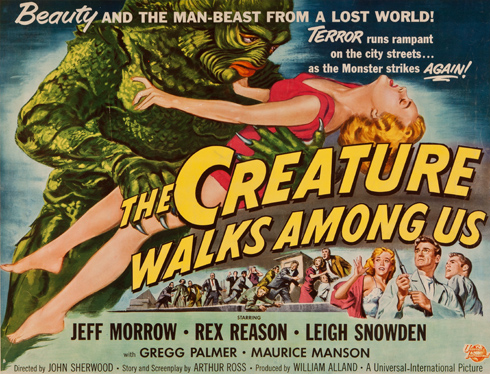